At 8:00 am I took the first dose of the labour cocktail. I tried taking the labour cocktail on Monday but nothing happened, so I wasn’t convinced anything would happen this time around. I spent the morning vacuuming, dusting and tidying and finished off my regular Friday cleaning routine. I even managed to prep everything for dinner and go out and buy an Easter gift for my Grandmother.

By lunch I was feeling a bit nauseous. I attributed my upset stomach to the Castor oil I took in the morning (it’s part of the labour cocktail). I took the second dose of the cocktail minus the Castor oil. I fed Monkey and forced myself to eat too. I ate toast, chocolate pudding and Sprite; it’s all I could stomach. After I put Monkey down for his nap, I snuggled into bed to read a book. Unfortunately, I kept on getting interrupted by my angry intestines. Ugg…Castor oil…

Around 2:30 pm I was having mild irregular contractions. It was nothing new to me, I’d been having contractions like these for over a week. However, the trips to the washroom were becoming debilitating so I called hubby and asked him to come from work. Hubby was here at 3:00 pm and around 3:30 pm I was having contractions 3-5 minutes apart lasting a minute or longer. Active labour had finally started. I walked or rocked myself through the contractions. They were easy to cope through at this point. We called our Doula to let her know labour had started and we were coping well.

What happened over the next hour is hard to explain. I jumped in the shower to wash up, but things started to move fast. I managed to wash my hair, eat a mango Popsicle and talk to our Midwife on the phone between contractions. At that point (4:00 pm) I didn’t things were that far along, but each contraction seemed surprisingly more intense than the last. I got out of the shower because I needed to use the toilet again. As I sat on the toilet the most intense contraction ripped through my body and I screamed. My mind was thinking “who is that crazy lady screaming?” and “we have to go to the hospital NOW!”. Hubby helped me dress but the next contraction brought me to the floor. I crawled through it as he pressed on my lower back. When it was done we walked out the house and to the car (4:30pm). I looked at the car hesitantly thinking “can I handle a contraction sitting in there?” but then I got in – I had no choice!

I tried to worked through the contractions by “blowing bubbles”, panting, waving my arms, grabbing hubby’s neck and occasionally screaming. Heavy rock was on the radio and my hands were tingling because I was hyperventilating. All of a sudden I told hubby “Oh *#$ I’m pushing!”. He took it all in stride and said “you’re doing great… don’t push”. He parked the car at the hospital and got out. I told him to forget about the ticket and the luggage. I walked (waddled) as fast as I could to the maternity floor. With each contraction my body was pushing. On the maternity floor a nurse told me to stop and work through the contraction. “Yeah right! Do you want me having a baby on the floor!” I thought as I waddled past her.

Once we got into the room (4:47 pm) I told our Midwife I was pushing. I was so happy to see her! She calmly got me on the bed and the next thing she said “yep your fully (dilated) you can push”. It was too intense and I wanted relief. I asked for medication. I didn’t really want it and I knew I wasn’t going to get it but it was so intense. Pushing made things feel more in control and less frantic. So did the back massage the Doula was giving me. I could feel the baby’s head crown.
“It hurts!” I said.
“That’s the baby’s head” replied our Midwife.
“I know” I moaned. I just had to say that it hurt. Labour is funny that way. Our Doula told me not too worry that I can become “real big” to let this baby out. It felt good to have her say it to me. After 16 minutes of pushing our beautiful baby girl was born (March 19, 5:03pm) weighing 7 lbs 11oz. 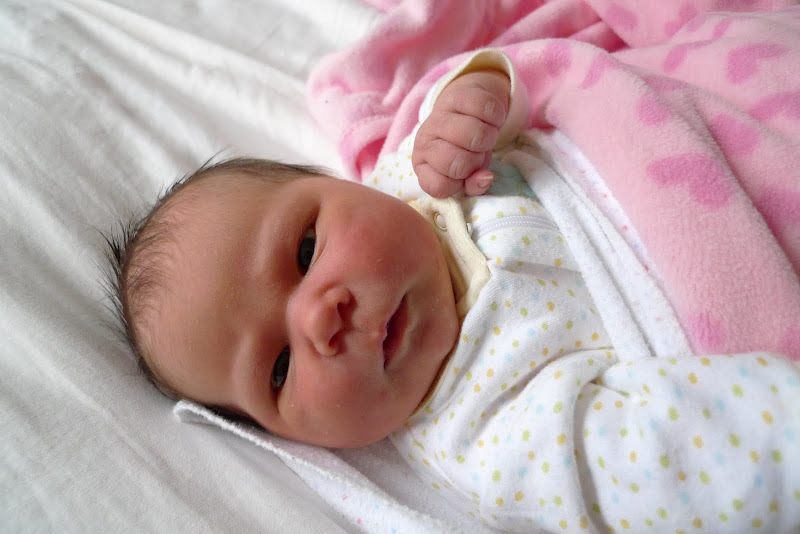 What a relief! No tearing, no drugs. I felt great! We celebrated with bubbly grape juice and cake – thanks to our wonderful Doula! I showered, breastfed and we left to go home 3.5 hours after our baby girl was born.

Book of the Week

Books of the Week

The Snow is Melting

What an adventure! It is kinda magical how your body just takes over… maybe magical isn't quite the right word.
Anyways, thrilled she arrived safe and sound and everyone is doing well. Thanks for sharing!

ps. in the realm of birth stories, that was not nearly as graphic as I was anticipating 🙂

Wow Josee, reading your story made me quite nervous actually – I didn't know it could happen so fast! I thought fast labour was something in the 4-8 hour range. I am so thankful that you and your little Claire are safe and doing well. I'm looking forward to more pictures and posts. I can't wait to meet your new daughter!

Don't be nervous Cindy 🙂 My first labour with Monkey was about 20 hours long! I don't think you'll have to worry about a 1.5 hour labour the first time round.