It’s life – things breaks. If you have little ones in your home a lot of things break. With some things you know it’s just a matter of time, like that potted plant that was sitting on our piano (why did I put it there?) or those cheap and noisy plastic toys (I’m glad they’re gone). Other things take you by surprise because you don’t quite understand how they broke. How does an alarm clock break? Maybe it got hit too hard one morning. There are two important (?) things in our home that are broken: the alarm clock (it happened a while ago) and our clothes dryer. And the funny thing is, I’m not in any rush to replace either of them.

Let’s look at the alarm clock: It’s noisy and it’s only function is to remind you that you aren’t getting as much sleep as you’d like. When Monkey was little the first thing I did when he woke to feed at night was look at the alarm clock and think “Arg! I’ve barely slept two hours”. Now that there isn’t an alarm clock in our room I’m calmer when Sweetpea needs to feed and less stressed when Monkey decides to wake up at 7 am.

Now let’s examine the dryer: Let’s just say that it was coming. Every time there was laundry in that machine it sounded like it was trying to break loose and come upstairs (akk!). If it wasn’t the rattling it was the squeaking, like nails on a chalkboard (so painful). It even attempted to eat socks and underwear. I had to forcefully remove items that got stuck between the drum and the door and I have a few chewed up items as proof. I must say that it timed it’s death at a good time though. Hubby recently put up a clothes line outside and it’s spring. Now that we have no dryer we hang our laundry outside. It’s cheaper and the laundry smells so nice (as long as my neighbors aren’t puffing away on their porch). 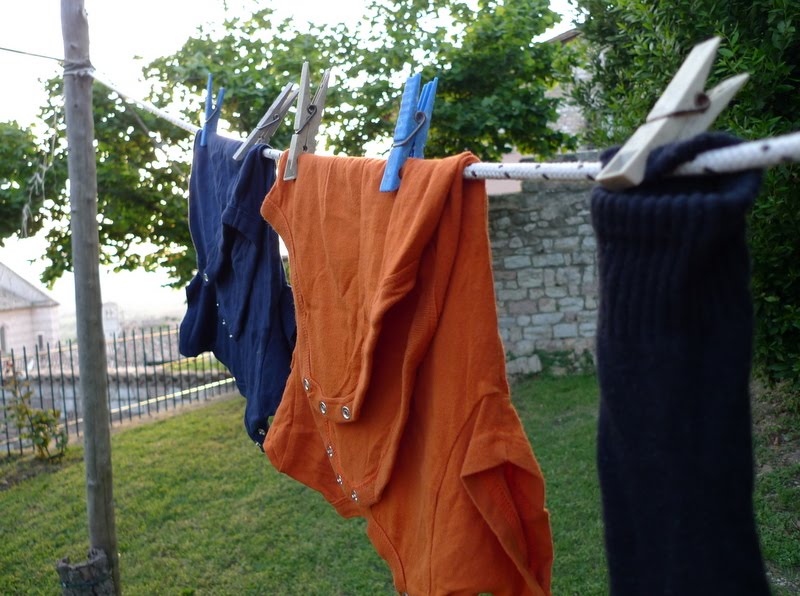