I remember Monkey going through this stage. It’s a vague memory, probably because I tried to forget it. But it’s all coming back to me now. Hubby bent over Monkey’s crib, patting him on the back whispering “shhh….shhh….shhh…” for almost an hour straight in order to get him to sleep. Eventually I resorted to nursing him to sleep which worked wonders and he painlessly grew out of.

Sweetpea was so good at putting herself to sleep… last week. Now I put her down and she has a meltdown. I’m not too worried about it. It will pass eventually, but it’s not easy. For now I give her lots of snuggle time and lots of opportunities to self-sooth herself to sleep. She’ll learn how to do it again and then she won’t want to snuggle with me as much. Ah yes, it’s bitter sweet…

Sleep is such a hot parenting topic. There are so many opinions about babies and their sleep habits (or lack thereof). What are your thoughts? Mine seem to be ever evolving 🙂 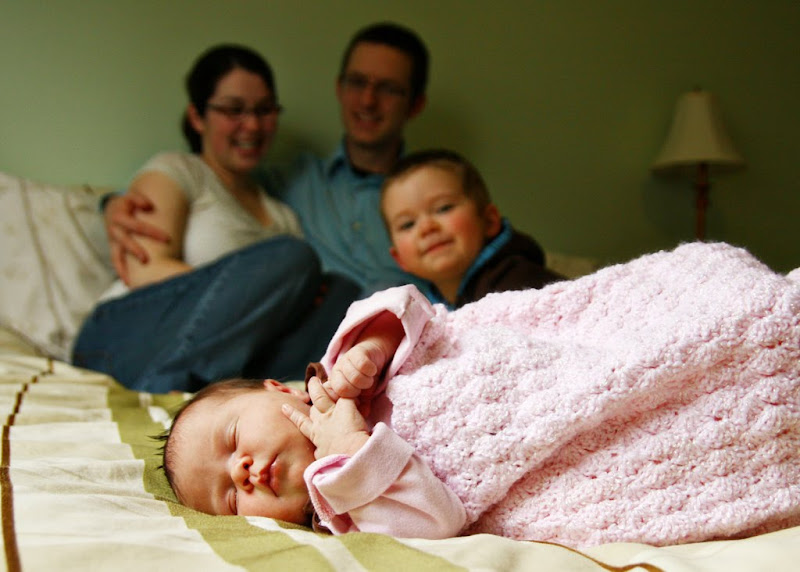 I agree that sleep is an interesting thing to talk about because everyone has their own opinion. Andres and I read The Baby Whisperer and liked what the author had to say about sleep and schedules. We are certainly not bound to a clock – Bunny sleeps when she's tired, but we try to have a bit of "activity" to tire her out and then put her down. I love snuggling with her and hesitate to put her in her bassinet until I KNOW she's asleep but we've tried it a couple of times with mixed results so far (not that we've had a lot of practice yet!) My more specific question revolves around the idea of self soothing and sucking a soother. Bunny is obviously a sucker and instantly settles down if she finds her fist / thumb in or near her mouth. If she had the coordination to do this, I think self-soothing to sleep would be really easy for her. But there are so many negative associations with soothers and babies … any thoughts?

Sweetpea occasionally sucks on her thumb to sooth herself (now that she can actually get it in her month) but she also takes a soother. We waited until Sweetpea was breastfeeding well before we introduced the soother. I know that there is a lot of debate out there re:soothers. As parents we want what is best for our child but there are so many "authorities" telling us this and that. What can I say…I'm glad soother exist! It really helped Monkey sleep through the night and weaning him from it was no problem at all. Sweetpea also seems to like it and at times it is the only thing that will calm her. Sure soothers can be problematic but I do believe they can be used appropriately.

first off: what an adorable family pic!!! you all are too cute 🙂

my thoughts on baby sleep are ever evolving as well. We co-slept for the first few months, but then the little guy began rolling over and I was way too paranoid to get any sleep like that.
Now I nurse him until he is drowsy and put him in his crib, which is in the corner of our room. Sometimes he wants his soothie, usually not.

It's good to hear you did the same thing with Monkey and he grew out of it just fine.

I don't think there is a right or wrong way to put a child down. Personally, I just want my baby to go to sleep happy and peaceful. I tried letting him cry it out a few times and it broke my heart to come into the room and see him sleeping with tears drying on his cheeks.
But then, I'm a big softie 🙂

and really– LOVE that picture!!!

My thoughts on baby sleep come more out of a place of laziness than anything else – we've coslept since day one because I was nursing and didn't want to have to get up multiple times a night to go in another room, or even get out of bed. Plus I've the delay in return to fertility that night nursing helps with is a really nice thing (I'm on 12+ months of no cycles). But really I say whatever works best for you, your baby, and your husband (and any other children) is what's best for your family! We'll probably move my daughter to her own room and own bed as soon as she's capable of easily getting up in the night to come find us… for now, the thing that has made it really do-able is we have a crib that we took one side off and attached to the side of our bed, so that she has her own space and we have our own space. Of course, she usually ends up snuggled next to me anyway, but it at least gives the first part of the night for us all to be comfortable! I also nurse her to sleep for naps (most of the time – sometimes she pulls off on her own and rolls over and goes to sleep) in her cosleeper, and then pile up pillows and the baby monitor for when she wakes up. Interestingly, my husband was pretty skeptical in the beginning, but now at least once a week or so he says "I'm so glad she's in with us at night… it just feels right to have her right here, instead of down the hall by herself."

Anyway, that's what works for us – I don't feel like I'm missing any sleep even though she probably still wakes up 3 or 4 times, because I don't really have to "wake up" to switch sides, and it definitely was a life-saver in the early weeks/months. But I think for those who don't sleep as well like that, it is definitely best to find a different method! I'm not really a fan of cry it out, but not being in anyone else's shoes, I don't think there is one definitive right or wrong answer.