Did you know that this week is Natural Family Planning Awareness Week?

I have vested interested in this week because I’m an advocate of Natural Family Planning. My interest in NFP developed as I was completing my nursing degree. As a nursing student I was not taught much about the intricacies of women’s reproductive systems. For example, not a word was mentioned about the fact that women are infertile more than fertile – pretty basic knowledge. Instead we were repeatedly taught about different forms of contraceptions and even though there was emphasis on having an open mind to alternative medicines, Natural Family Planning didn’t qualify. I have heard that this information bias is a common phenomenon even among medical schools.

Because of the information I received in nursing school (or lack thereof) and because of my own personal interest (I was getting married) I started looking into NFP and was surprised by what I found. A lot of NFP research and information exist, yet most people still equate NFP with the Rhythm Method. The errors of the Rhythm method have been long exposed and since then researchers, physicians, and nurses have developed many other forms of NFP, some of which are as effective at preventing pregnancy as chemical forms.

Armed with this new knowledge I decided to learn more about a particular type of NFP, the Billings Ovulation Method. I liked the simplicity and effectiveness of this method so much that I decided to become accredited to teach it – and that’s what I do!

So why do I advocate NFP? Simple, I am convinced that it is healthier for the body, mind and spirit. While I could easily ramble on about physiology and theology, I won’t. I know that there are fabulous resources out there that cover these topics and I would be happy to share them with you.

Below is the 2010 poster developed by the USCCB for NFP Awareness Week. Look for it in your Catholic parish. Not there? Chat with your priest 🙂 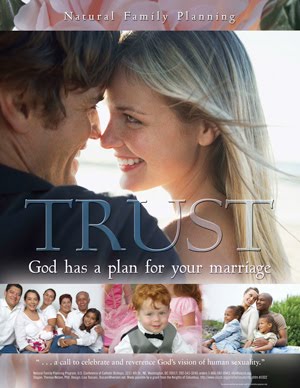 I am also a huge fan of FAM, or Fertility Awareness Method. It uses a sympto-thermal method to track fertilty. I got started using Toni Wheshler's Book: Taking Charge of Your Fertility. It is a fabulous book, and it was a HUGE learning curve for me. How empowering! Sadly though, most women know very little about this aspect of their bodies….I also think it is a great, non-invasive, non-medicalzed way to get to know your cycle if you are having "problems"….before running off to the Dr for tests and medications. Our midwife was always pleased when I could show her months of charts : )

I think it is so sad how little women know about their own bodies. In the past thirty years we have learned an extraordinary amount about our fertility cycles, and yet, ironically, that coincided with the rise of the BCP and the coming of "sexual freedom".

Even my sister-in-law, who is a doctor, doesn't know as much about the menstrual cycle as I do. She barely grazed the subject in med school. Types of CM and cervix position? They didn't even mention it. BCP was promoted as the "cure-all". How sad.

DarwinCatholic wrote a great set of articles on the subject. I couldn't sum it up better.
http://darwincatholic.blogspot.com/2010/07/real-sex-vs-contraceptive-mentality.html

And yes– I HATE how people equate the Rhythm Method with NFP (and by extension the Catholic Church). Although it's only further proof of how little most people know.