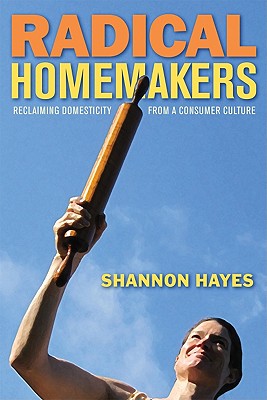 I came across this book by accident. I was looking online through my library’s list of books published in 2010. I saw the title Radical Homemakers: Reclaiming Domesticity from a Consumer Culture

, was curious and put it on hold.

I wasn’t sure what to make of the cover photo. At first I thought is was a woman passing a baton in a relay race. Then I noticed it was a rolling pin. The women wielding it looks like she’s ready to lay the smack-down. She’s obviously not in a kitchen, unless her kitchen is outside… maybe she’s chasing some kids out of the house with the rolling pin.

Oh yes, about the book. To start with the book is divided into two sections. Part 1: Why, looks at the history of homemakers. It compares homemakers pre- and post-industrialization and examines Betty Friedan’s claim that women in the 1960s were dissatisfied with being home and experiencing “housewife syndrome”. Part 2: How, is a compilation of her observations of qualities and behaviours that she observed among radical homemakers that she interviewed.

According to Hayes, “Radical” homemakers are those that enter the process of renouncing, reclaiming and rebuilding. They are renouncing the money-centered-consumerist way of life and reclaiming the lost art homemaking for the improvement of themselves, their spouse, family, community and environment.

I found part 1 of the book interesting. It examines and challenges our society’s view of the homemaker. I also gleaned some interesting information from part 2. However I found some of part 2 to be less applicable because it was written for people living in the US. I also found the second part to be repetitious at times and had a difficult time finishing the end of the book.

Overall, it’s an interesting book. It challenges and provokes but the suggestions made are clearly not for everyone and Hayes doesn’t pretend them to be.