I am now in the throws of canning. The last few days I’ve been working away in steam filled kitchens filling jars with peaches and tomatoes. Next it’ll be more tomatoes, pickles and jams. I’ve only got one small burn on my arm. There’s no way to come away from so much canning unscathed.

This year I’m quite motivated to can food. Store bough canned food is often packed in tins lined with epoxy resins which contain Bisphenol A (BPA). The lining prevents food from making direct contact with the metal (a good thing) but as a result BPA leaches into the food. BPA is suspected to affect neural development and behaviour. Little ones, especially under 18 months, are particularly sensitive to BPA which is why Canada has banned BPA from baby bottles.

Health Canada recently published a survey of BPA in canned food in the Canadian market. For the survey, they tested 78 canned food items (soups, tomatoes, vegetables, tuna) from local grocery stores. The items with the highest levels of BPA were tuna and then canned soups. Health Canada claims that the current dietary exposure to BPA through food packaging is not expected to pose a health risk to the general population, including newborns and infants.

Now here’s the thing. When it comes to chemicals in our environment the approach is often innocent until proven very guilty. I prefer the approach guilty until proven completely innocent. When Health Canada tells me that BPA through food packaging does not to pose a health risk then I might relax. 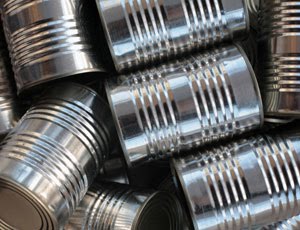 Canning your own food is one way to reduce the amount of BPA in canned food. I say reduce because canning lids also contain BPA – darn! At least it’s the lid and not the whole container…

Ah yes, BPA and cans-my husband who likes to make "cheater" Brazilian black beans with canned beans was disappointing when I told him about the BPA a few months ago. (Sorry, dried beans are best, mah dear!) His mum also does canning and I was wondering about this very thing as she just gave us some of her delicious strawberry jam a few days ago. It's a shame, she grows her own everything, it's about as organic as can be only to have it BPA-ed, even if a tiny bit! But you are so right, this way certainly reduces it, not to mention the food contained is your own and no doubt already so much healthier.