The next morning (last Wednesday), 12 hours later, the eight pails of juice were sitting under my carport. Sweetpea had her immunizations at 9:00 am. I also had to return the apple grinder and press, buy sugar and can 20 lbs of perfectly ripe pears. Read: Recipe for disaster.

The immunizations went well. Monkey only tried to climb the partitioning wall at the clinic twice. Dropping off the grinder and press went smoothly until I realized Hubby forgot to put the press barrel in the car – oops!

After a quick call to Hubby we decided to bring 15 gallons (56 L) of the juice to the brewery to be made into apple cider. My next stop was Costco to buy sugar for the brewery. When I took Sweetpea out of the car I notice the explosive poop. Good thing I packed all those diapers and wipes but no spare clothes… I bought the sugar without browsing the book section (a significant feat for me) and went to Superstore for some canning jars.

I returned home for the apple juice and then drove it to the brewery. At the brewery I decided to complicate things further by getting the equipment to brew apple wine in my basement. I’ve never brewed anything before… at least not on purpose anyways. The apple wine took care of another 5 gallons (19 L) of our apple juice.

That left me with 45 L of apple juice which I canned into 11 quart jars.

So there you have it, 120 L of apple juice stored! 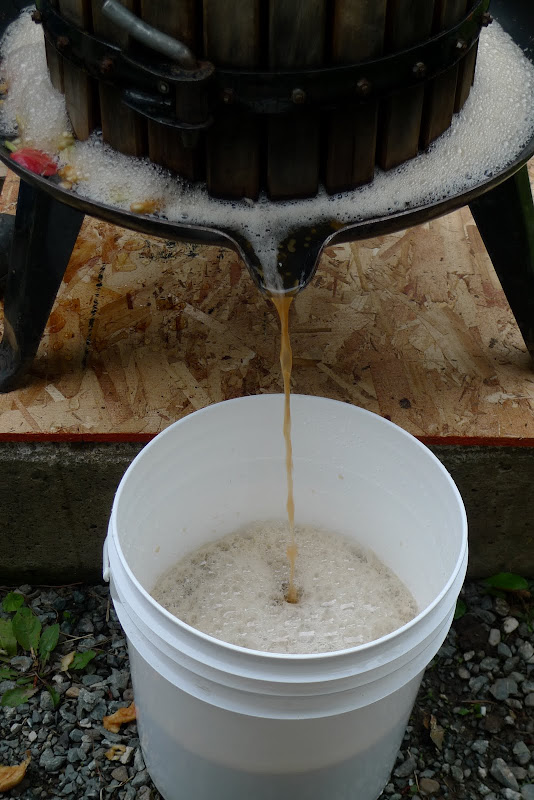 Wow, you are super woman! Good job:) I'd love to see a picture of all your canning.