Going to Church with Little Ones + A Giveaway

With two littles ones, it’s a challenge to pay attention during Sunday mass. For the longest time this really bothered me. I would come away from church feeling frustrated and angry. I felt like I had spent the whole mass forcing Monkey to stay in one spot, disciplining him when he misbehaved and quieting him when he’d shout or cry. I really want Monkey to learn how to behave at Church because it’s a special place but it seemed like a losing battle. So, I decided to try another approach.

1. I had to re-evaluate my expectations of Monkey. He’s a 2.5 year old boy and very busy. Sitting in one spot for a whole hour is not easy for him, even if it might be for other kids his age. So should I expect him to sit still for the whole mass? I’ve decided, no. That being said, Monkey isn’t allowed to crawl under pews, throw books at people, or run around freely… even though he likes to try these things Almost. Every. Sunday.

2. I needed to come to a place of acceptance. I have two little ones now. Participating in mass won’t be the same as when I was single, engaged or married without kids. And that’s alright…right? I’m learning that if I go to mass, can’t fully participate and come away feeling frustrated (because I only heard half of the Gospel and only enough of the Sanctus to kneel…) that I should offer up my time spent at church to God. And when I go to mass, am able to fully (or almost fully) participate and leave feeling filled and uplifted, I should recognize the awesome gift that God has given me and to thank Him. Yes, every mass is a gift but I am coming to understand that God sees my efforts and appreciates them even if I cannot fully appreciate my time at church.

3. I am trying to give Monkey more opportunities to be at church. In other words, I make an effort to bring Monkey and Sweetpea to mass during the week. Weekday mass isn’t busy and is much shorter. I have found this to be helpful. Now Monkey can almost make it through week day mass without a major incident. Yay!

4. I have to remember that I go to church not because of well said homilies, in-tune singers or well behaved children. I go so that I can experience intimate union with Jesus Christ.

“The culmination of the Mass is not the consecration, but Communion.” – St. Maximilian Kolbe 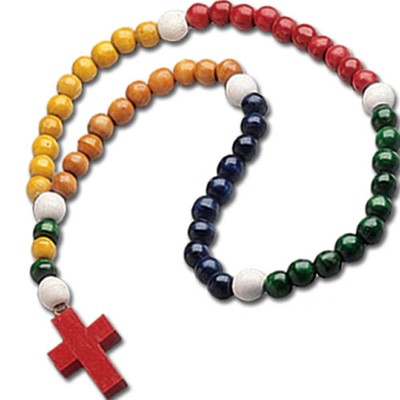 And now the giveaway! Since October is the month of the Rosary what could be more appropriate a new Wooden Kiddie Rosary? To enter the giveaway simply leave a comment about an experience you’ve had with little ones at church and mention that you want to be entered in the draw. The entry time will end October 31st, 2010 at midnight. The winner will be chosen randomly and announced November 1st.

My husband and I were at Mass and the priest was giving a sermon on using the Rosary as a spiritual weapon. My then almost two year old son proceeds to run down the center aisle waving his wooden Rosary like a lasso, or perhaps more like a pair of numb-chucks! I wanted to die right then and there! No need to enter me in your drawing…on wooden Rosary is dangerous enough!

Thanks so much for stopping by and commenting on my post on Catholic Mothers Online! I know it's LONG overdue, but I wanted to stop by here as well.

We actually have this wooden rosary — somewhere in my home, but the boys would use it as a weapon, much like ELizabeth's son!

I'm going to TRY to get to a Daily Mass this week, to start practicing.

So good to meet you!