The Worms are Still Alive! – A Vermicomposting Update

At the beginning of September I joined the rank of those “who keep worms in their house”. Most people don’t even know I have worms there are worms in our basement. Even our international student has no idea. There hasn’t been any bad smells in the basement and the food we feed the worms disappears fast! The worms can almost keep up to our kitchen waste which is a relief because our compost is officially on hold for the winter. Hubby refuses to even try fitting just a little more in the bulging snow buried compost. I don’t blame him but it makes me sad to throw compostable material in the trash. Thankfully vermicomposting has helped reduce the amount of organic waste in our trash bin. By next winter I plan to have enough worms so no banana peels find their way to the trash. 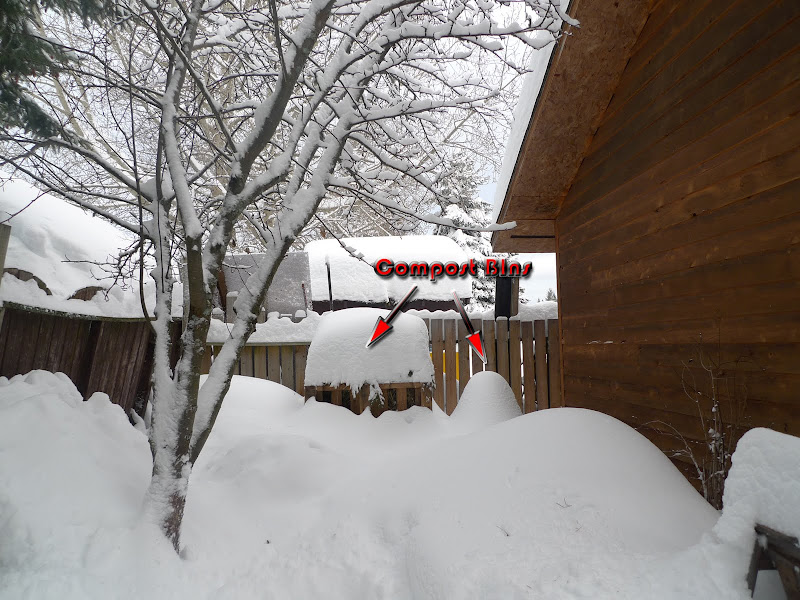 Since I’ve started keeping worms I learned some valuable lessons that I want to share.

If you want to vermicompost make some vermicomposting friends. These people frequent places like farmers’ markets, gardening centers, and thrift stores. When you meet someone new and you want to know “do they vermicompost?” mumble something to yourself about composting and worms. “I have to feed my worms” does the trick. Vermicomposters will catch on fast and without prompt start divulging the inner workings of their composters and may even tell you the names of their favorite worms.

Seasoned vermicomposters are a wealth of knowledge. One of the vermicomposting ladies I met even graciously donating a piece of worm covered apple from her bin to bump up the waste consumption of my bin. How nice!

Lesson 2: Aerate the mass and observe.

Dedicate a pair of rubber gloves to your worm bin. Once a week put them on and gently aerate the mass of worms, dirt and food by lifting, shifting and folding over the mass. As you do this inspect the moisture content of the bin (is it too wet? too dry?), notice how much food the worms are eating (should they be fed more? less?) and note if there are pieces of food your worms aren’t enjoying (worms don’t like onions or fruit stickers…yes stickers).

Throw in a banana peel and it might take a while to disappear. Chop up the banana peel and poof! it’s gone. Some people have a dedicated food processor that they purchased from a thrift store for this job. I just chop things with a knife.

Worms need grit to help them digest their food. A cup of sand or soil works fine. Another great way to provide grit it to gather some eggshells and send them to the food processor to be ground into dust. Once every couple week sprinkle a couple tablespoons into the bin.

Here is a video that I put together to give you an idea of what vermicomposting looks like.

Thanks for posting this!! Did you already have it planned? Are you sure there is no smell at all? I would like some worms but I'm just not sure I have somewhere to put them, my laundry room would really be the only spot and it's right off my kitchen…

Are your worms breeding in there? Do you have to go through and get rid of some every so often? This is very interesting stuff.

There is no smell other then the normal dirt smell you get when gardening. If the vermicomposter is smelly then it can mean that it's too wet or you are adding too much food.

My vermicomposter is in the laundry room under the big wash sink. Having it right near the kitchen shouldn't be a problem.

The worms do breed. I've read that the population doubles each month and the baby worm take 60-90 days to mature. If there is too many worms you can sell them as fish bait. give them away or start another box. I haven't had this issue yet but when I do I'll blog about it.

That's so interesting Josee!! Composting isn't a big thing here so I've been frustrated with having to throw out my scraps (no back yard so don't have my own compost bin) but this may just be the answer! How did you get started? Any tips? Is that straw you have in there? Do you start the worms out with a bunch of dirt?

My worms are hanging in there too 🙂 Okay, they're my husbands worms not mine. I don't think he aerates them or feeds them sand or anything gritty…I'll have to suggest that. he does give them a lot of newspaper on top of food scraps…do you feed your worms newspaper?

@ Jenn – You need to get some vermicomposting worms (red wigglers) to get started. A good place to ask around would be at your local farmers market. Somebody there might sell worms or know someone that does. The worms I bought came with some dirt. When first starting out I also added some damp peat moss and damp newspaper. Check out my other post on vermicomposting to see how I set up my bin. I do put in some straw occasionally.

@ Elizabeth – I'm glad to hear you (your husband's) worms are doing good! I do give my worms newspaper but not that much. Do you find that it helps keep down the moisture content? do you dampen the paper first?