We started raising Champagne D’Argent rabbits the summer of 2009. Many people consider rabbits to be pets, not food, but rabbits can be cheaper and easier to raise than chickens, especially in small spaces (like backyards). Our goal was to breed and raise rabbits for meat, manure and fur, so far we’re achieving two out of three of our goals. 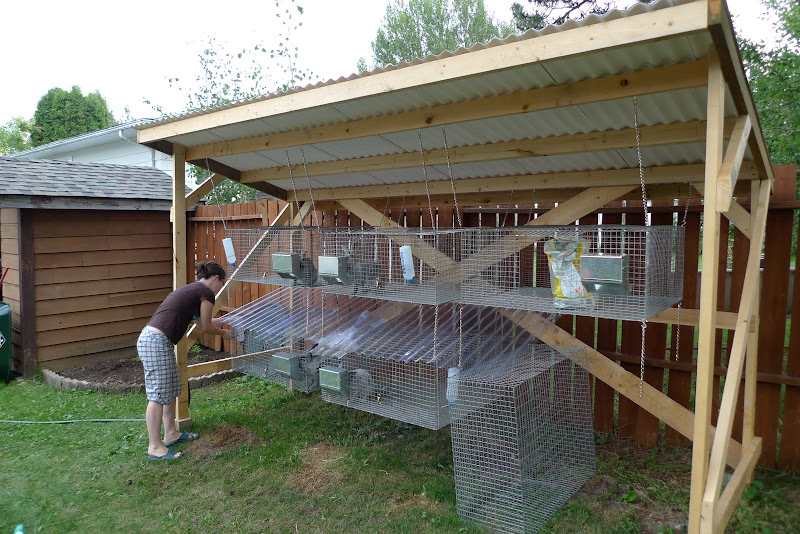 Our rabbitry in the summer of 2009

Rabbit meat is very nutritious, lean and mild tasting. Female rabbits, called does, can have 4-5 litters a year with an average of 6-8 kits a litter. Because rabbits are such efficient eaters the fattening period is short and the kits are ready to be butchered at about 10-12 weeks of age. Last year our two does had three successful litters each, a total of 31 kits. We’re hoping to increase the number of litters this year with the addition of our two new does (now we have four does and two bucks). 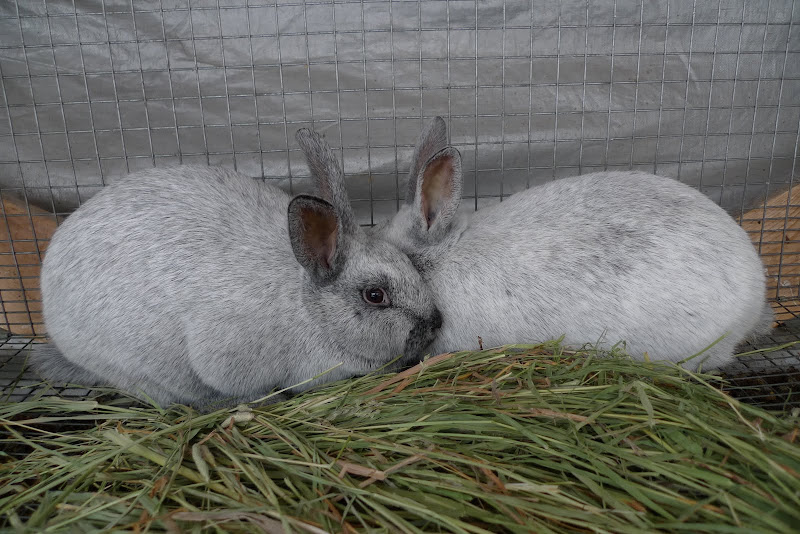 Over the last year we’ve use rabbit meat as a successful substitute for chicken in many of our favorite dishes. Most people can’t taste the different between rabbit and chicken meat in a meal. Since rabbit isn’t popular in North America, rabbit recipes can be tricky to find. I’ve been slowly compiling some favorites which I will post soon.

Rabbit poop is amazing stuff. It doesn’t need to be matured like chicken poop. You can take it right from the hutch and toss it into the garden as long as it’s not saturated in urine. Our gardens get a healthy dose of manure in the spring and fall. We’ve been giving the extra poop to fellow gardeners and vermicomposters.

This is the one goal we haven’t reached yet. For a while I was keeping and freezing the furs but then I stopped. I don’t know the first thing about tanning furs or where to get the materials to do it. 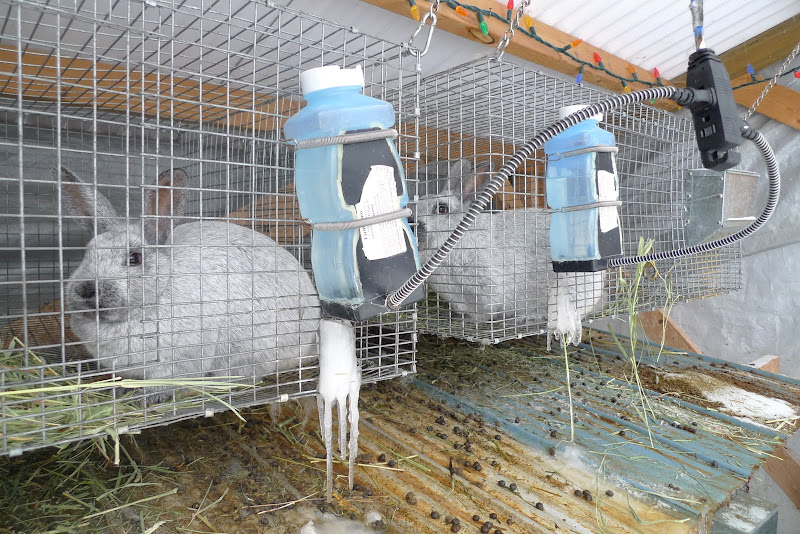 Our rabbits can handle the winter as long as they have fresh food,
water and a place to hide from the wind.
Raising Meat Rabbits was last modified: February 17th, 2011 by Josée
12 comments
0
Facebook Twitter Google + Pinterest

From the Rabbitry: The Continuing Saga of...

Tanning furs is a learning experience. I recommend watching youtube! We are practicing with squirrel hides. The process is slow going, but if you take a bunch and take everything day by day, the outcomes can be rewarding!

Post pix of the young women killing cleaning and eating a meat rabbit. Trow in come cleaning tips too

look up the series "naked into the wilderness" they have an awesome segment about using the brains of an animal to tan hides with. the entire series is a must watch for any survivalist or homesteader. check it out.

here you go, first url is the main series, second url is the part about brain-tanning. sorry for the messy post, first time user

Not sure if you're still following this thread, but we're just about to start raising rabbits in our backyard in our Berkeley rental. Your design seems to be the most sanitary and easy to maintain and we'd like to mimic it, but wanted to know what you do with the kits when they're no longer nursing but aren't ready to be butchered. Do you have a special grow-out area for them, or do you leave them in the cage with their mom until you butcher? Thanks for the help!

Hi Rachel, Thanks for the question. I received and replied to your email. Let me know if you have further questions.

Hello. In searching for rabbit hutch ideas I came upon your site. I have tanned rabbit hides successfully and easily before and the info was in an article in The Mother Earth News in 1982.

hi.. I am interested in the same as Rachel.. I have no rabbits yet, still learning as much as I can for the big leap this spring. Thanks

We have done one of two things for keeping the kits until butchering time. In the past we kept one cage empty to move them into but last summer we build a run for them (with wire on all sides including the bottom). The run is about 2.5 by 4 feet (or so) and can be moved around the yard. It works well but if you don't want poop everywhere in your yard keeping an empty cage for kits is the better option. I hope that info helps, let me know if you have any other questions.