Disclaimer: If you think butchering and eating rabbit is an awful thing, I recommend reading another post. We’ve chosen to raise meat rabbits so that we can provide our family with healthy, environmentally sustainable and locally grown meat, and butchering the rabbits is part of the process.

When people find out we raise meat rabbits, the first question they ask is “do you butcher them yourself?”. Yes, we do; however, neither of us had butchering experience before raising meat rabbits, other than portioning out a store bought chicken. The very first time we butchered rabbits we had some help from my father and brother (19/06/11 – correction: it was actually my BIL and SIL) and the internet. Taking the life of an animal, especially one that you’ve cared for, isn’t easy. But, we raise meat rabbits and that’s part of the job description.

Because of the cold Northern winters and the fact that our rabbits are outside, we don’t breed our rabbits from November to March. The weather at this time is too unpredictable and whole litters, no matter how well built the nest box, can die of cold. This year, the rabbits had their first litters in April. Once the kits (baby rabbits) reach 10 to 12 weeks of age they are ready for butchering. After 10 to 12 weeks of age, the feed to meat conversion ratio increases, and it becomes less economical to continue growing them. Also the older the rabbit gets the tougher the meat becomes. At 10 to 12 weeks the rabbits dress out between 2.5 to 3.5 lbs, fryer size. It might seem that 10 to 12 weeks is young, but meat chickens are butchered at 6 to 8 weeks. So, it really isn’t that young.

We kill each rabbit by dislocating its neck. It might sound awful but it’s fast, clean and the rabbits suffer very little. Cervical dislocation is an approved method of rabbit euthanasia by the Canadian Council on Animal Care. Our tool of choice for dislocating their neck is a spade on a long handle. 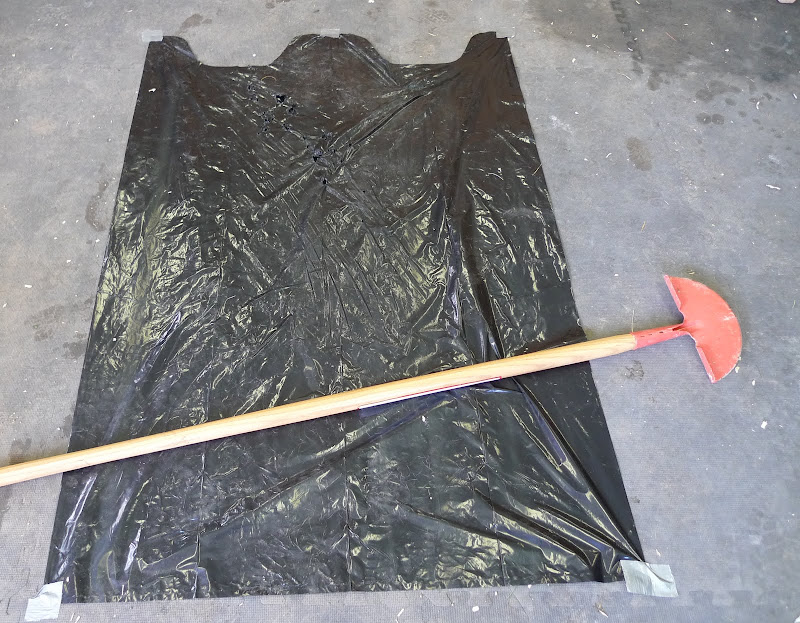 Goodness! I hope you don’t think that we use the spade itself. No, we use the stick portion, but the spade end prevents the stick from rolling around too much. To dislocate the neck, place the rabbit on the ground and rest the stick gently on the neck behind the ears. Fold back the front feet; it helps to have someone help with this. Once the feet are folded back, rest a foot on one side of the stick and take hold of the back legs. When the rabbit is in position, swiftly place both feet on the stick, one on each side of the rabbit’s head and pull the legs up towards your head. You should hear the neck pop and dislocate. The rabbit’s muscles will twitch and back legs kick for 15 to 30 seconds. Gently hold the rabbit down on the ground until this ends. 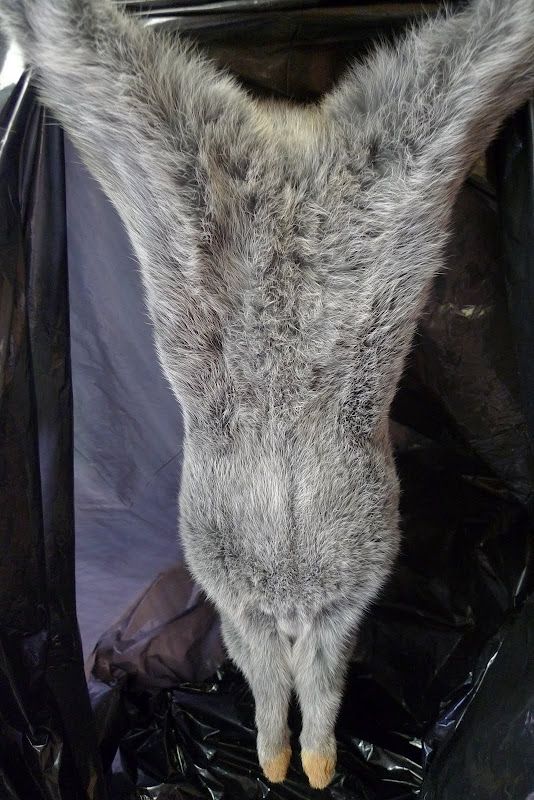 The rabbit is then hung by its feet and skinned and eviscerated. If you wait too long to do this task the muscles will harden, because of rigor mortis. Delayed bleeding can also affect colour and juiciness of the meat, especially when the meat is aged (Omojola, 2007). After the rabbit is cleaned, we wrap it in a plastic bag and then in butcher’s paper to be frozen. This combination extend the freezer life of the rabbit. I don’t age the rabbit meat in the fridge, but after reading this article I’m starting to consider it. Apparently, ageing the meat for two to three days in the fridge improves flavour and tenderness.

Actually… I'm pretty sure your father was not there the first time. I think it was your brother and your bil and your FABULOUS sil. Just so you know. 😉

Very interesting Josee. I totally understand (and admire) your reasons for raising your own rabbits and butchering them, but its not something I think I could do. I got a little teary here reading your description. I think I'll have to stick to making cakes 🙂 Thanks for sharing tho.

Yes Chelsea, you're right. It must have been the second time that my dad and brother were there.

Jenn, it isn't for everyone so don't feel bad… after all we need people making cakes too 🙂

Just yesturday I was thinking about raising rabbits and chickens for food but oh my, I'm not sure I could bring myself to do it. I'm not a sranger to seeing dead animals, my dad hunts deer but to do the killing myself…. I just don't know. Thanks for the info. it gives me something to ponder. Enjoy your rabbits =) Oh thank you for responding to my question about the DIY beauty product book.