We keep our rabbits outdoors. This limits us to when we are able to breed them. When we are in the dead of winter, no rabbits breed. The risk of losing a litter, no matter how well built the nest, is too high and the stress incurred by the does and ourselves is not worth the risk. The last litters are born in September or early October. Unfortunately, the weather is already getting quite chilly.

Our four does kindled last week. Two of them made beautiful nests, thickly stuffed with hay and lined with a lovely layer of pulled fur. Their kits (baby rabbits) have done well. The other two does didn’t prepare well enough and kindled their litter in the middle of the night right by the nest box door with no fur to cover them. The litters died. This is a reality of raising rabbits. It’s frustrating.

The two does that lost their litters were re-bred. They will be due at the end of October which will be colder I’m sure. We do have a heated shed so they will be moved there to kindle. Normally, we don’t do this but one of the does is getting older and we really want to get a couple does from her to breed next spring.

One thing we’ve discovered in the last few years of raising rabbits is that some does aren’t good moms. We give a doe three fair chances. If after three breedings the doe continues to scatter or eat her young the she will become dinner. It may sound harsh but the cost of keeping a doe and the space she takes is significant when your have a small rabbitry.

Another problem we’ve encountered is our nest boxes are flawed. The door for the box is too low and occasionally a kit will fall out. This has happened twice in the last two days. We lost one little kit yesterday. This morning when I looked out the window I saw another small black form on the cage floor. My heart sank as I ran outside. Luckily, it was still alive, but barely. I took the kit and plunged its body in a sink full of warm warm. After it warmed up, I dried it off and placed it on my skin sort of like kangaroo care. It was a successful baby rabbit rescue! 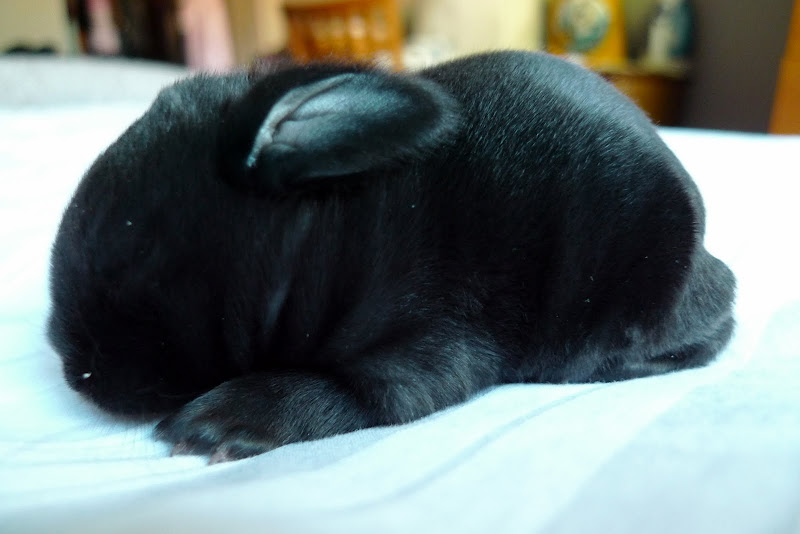 9 Magical Ways to Celebrate May Day...

Awe! They look so sweet when they get their fur! How is your doe who had a hard time with her litter doing this time around? And did you get any more canning done recently? My apricots are sitting proudly on my top shelf NOT to be disturbed for awhile!

Hey Josee;
Hope life is treating you well and I'm glad you're blogging regularly. You're a regular pioneer mom, yogurt making, canning and raising rabbitts. You'll have to tell us more about what happens between doe and dinner sometime; my interest is piqued.