We have just returned from a houseboating adventure on Shuswap lake. It was meant to be a time of rest and relaxation for everyone, especially for my father who just completed his first ever Ironman triathlon. My husband couldn’t join us so I went with the three little ones.

The Location
The Shuswap is a beautiful area. As I child we spent time camping around and exploring this area every few years. The weather can by quite warm but it was a little cool with some rain while we were there. 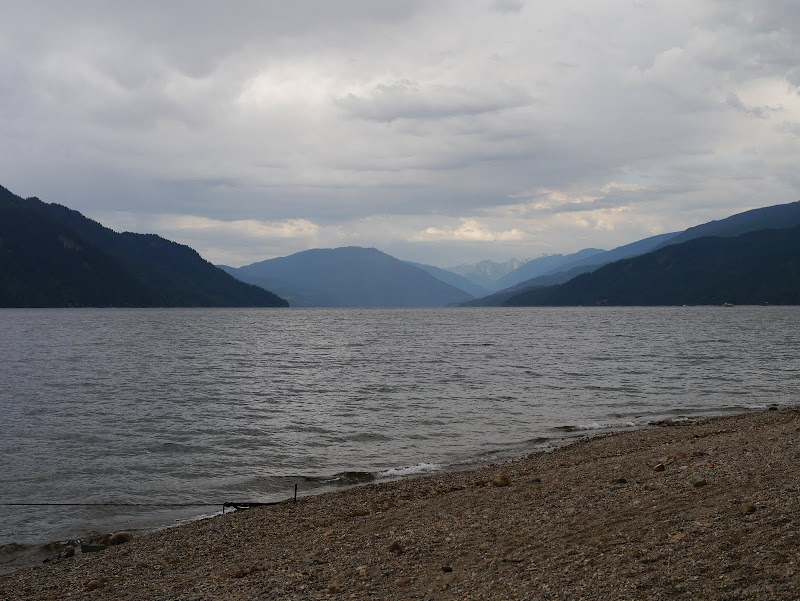 The Houseboat
We rented a houseboat from Waterway. The houseboat was older and while it was in decent condition the floors were quite dirty. My parents arrived a day before we did and cleaned up the floors before we arrived. The boat was just big enough for everyone aboard (8 adults, 6 children). The boats come in a variety of sizes. I slept in a tiny cubby room with the three little ones. Monkey though it was a great adventure! 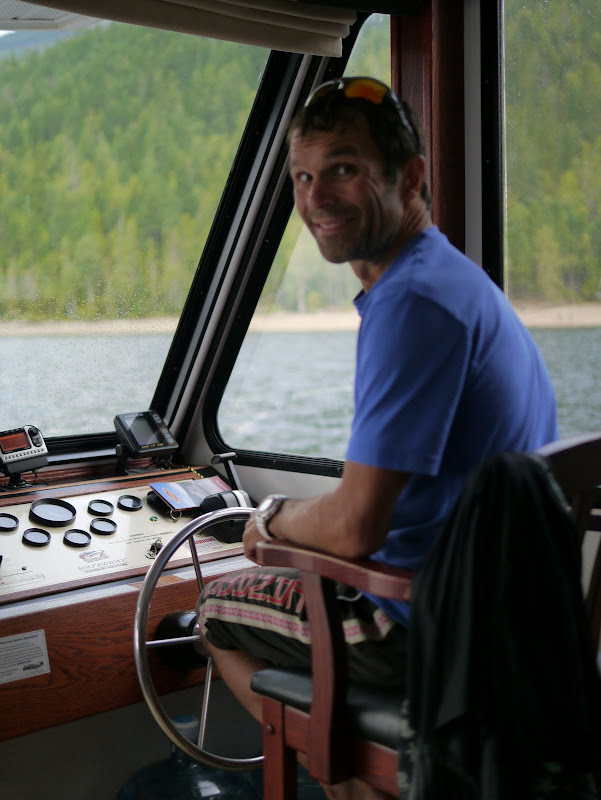 The houseboat we were on was not designed with little children in mind. There are numerous hazards. For instance the bedroom windows open completely, including the screen, making it a great jumping out location for little kids. Not safe at all! I didn’t realize this until I walked in on Monkey leaning on the window throwing diaper wipes into the water. Talk about a heart attack! The rails on the decks are easy for little children to slip through and upper deck is only accessible by steep ladders. So with all the hazards, namely falling out windows and off decks, that accompanied the houseboat, it’s clear that I couldn’t fully unwind. 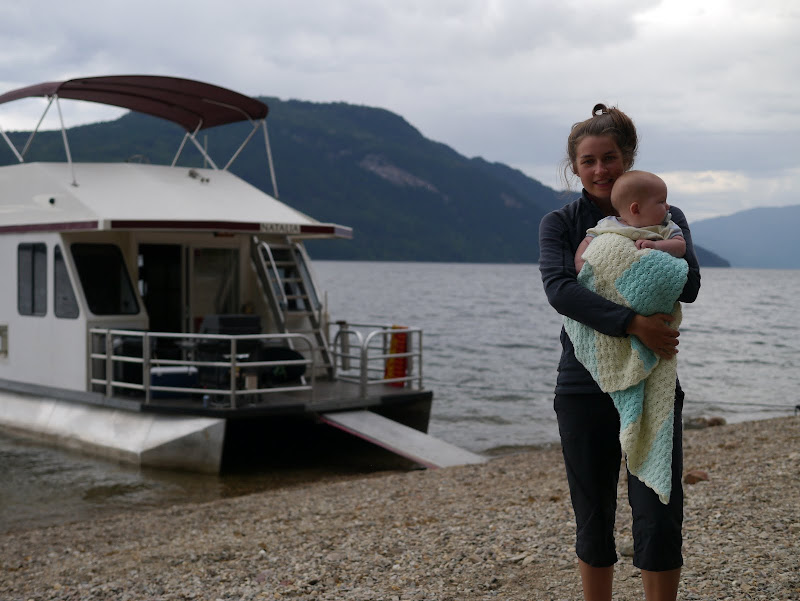 To ensure safety my children lived in their lifejackets, with the exception of bedtime when I locked the windows and door and slept right beside them.
The Adventure
When the houseboat was beached the children would play in the water. Monkey and Sweetpea spent hours playing outside. It was by the far the best part of the trip. They piled rocks, caught minnows and splashed in the water. I could relax a little and enjoy the beautiful scenery. I even got to swim a little bit too.
When the houseboat was floating on the lake the children would get restless quite quickly. We put on a movie for them to watch because there wasn’t much room for play indoors. The trick, I suppose, it to limit the time spent floating around the lake if you have little children, get a bigger boat with more indoor space, or bring a bag of fun indoor activities for them to do. 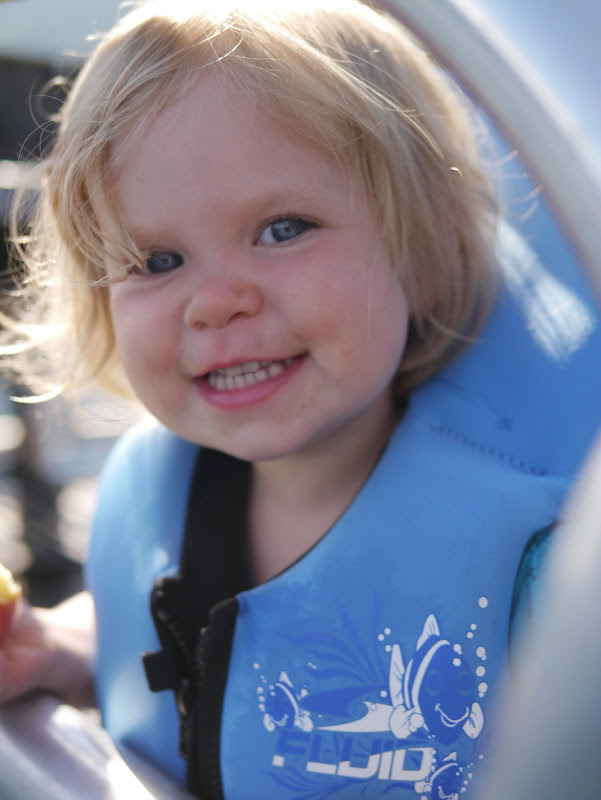 The night times were challenging. Every night a party boat would park beside ours, even though we avoided the “party beach”. The first night some guys came to jump off the top of our boat naked, the next night there was 80s music and fireworks and the last night included nipple pasties and plastered guys. It made it difficult to rest at night, especially since houseboat walls are not very soundproof.
The Verdict
It was wonderful spending time with family and friends. However, I won’t be bringing little children on a houseboat again. The children enjoyed being on the beach the most so I’d much rather do a day trip to the beach. It’s nice to have some of the houseboat amenities but not worth the safety concerns and lack of sleep. 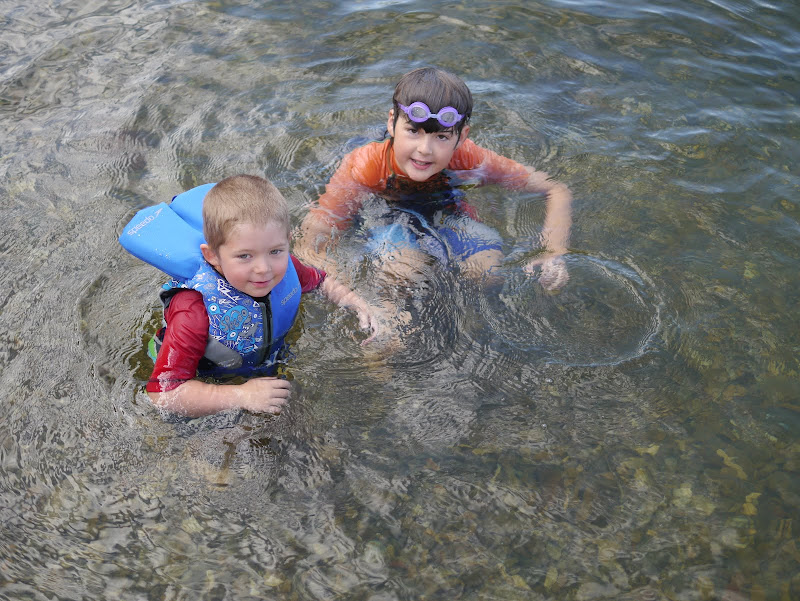 Have you ever been on a houseboat with children? What has your experience been?
childrenHouseboatingLakeShuswap
7 comments
0
FacebookTwitterPinterestEmail
previous post

Yikes! Never been on a houseboat with or without kids. And really had never thought of all the danger involved. Glad you got through it all safely.

Goodness!!!! I didn't realize you were going without your husband!!! You are a brave woman.

I second Chelsea's comment! From the sounds of it, I would NEVER have attempted such a holiday, especially by myself. Well done! I hope you have some good pictures and stories that will be fun to tell in the years to come 🙂

I'm glad we were safe too! Never again though :S

I'm just glad there were no injuries or fatalities…

Thanks Cindy 🙂 We'll definitely have some memories from the trip!

Thanks for this post I have been thinking about trying this but will now put it off for a few years, yet.