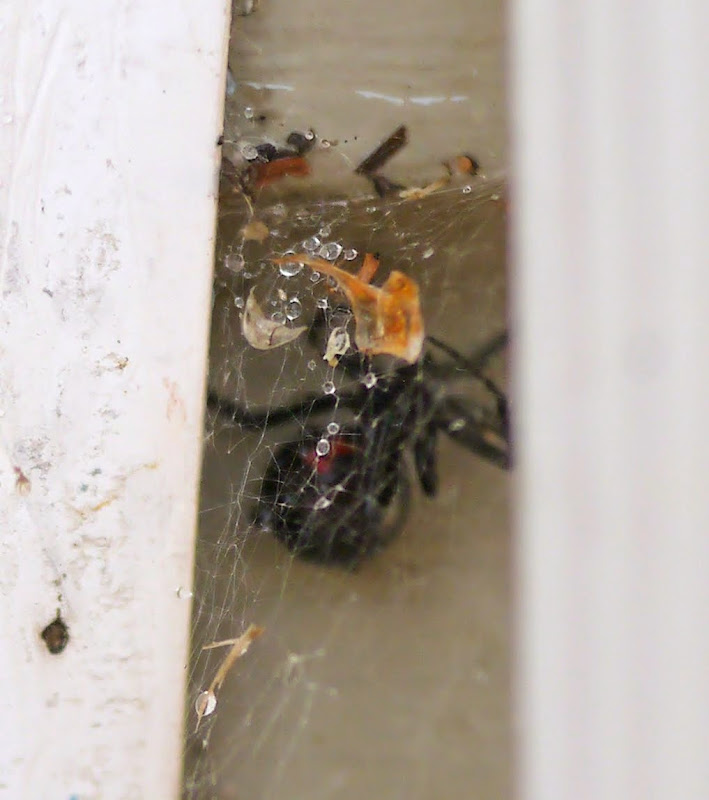 When you are exploring the back country of northern British Columbia it isn’t uncommon to spot a bear, cougar or mama moose. You generally want to avoid any direct confrontation with those three things and usually it’s not a problem. There are bears and cougars in the south of British Columbia but there are some other smaller venomous creatures that make me much more uncomfortable: rattlesnakes and black widow spiders. The most impressive snake that I’ve seen in the north is a common garter snake and as for spiders the daddy long legs spider is almost endearing.

Yesterday I encountered my first black widow spider. I was watering some plants outside and noticed a messy web near the downpour spout. With the hose I tried to spray it away but the webbing was surprisingly resistant. Figuring my water spray wasn’t powerful enough I walked away only to catch a glimpse of something large and black scurry away into the corner. I stopped and stooped down for a look. As I did this I remembered all the times I laughed at tourists who stopped by the edge of the highway to take pictures of bears. On closer inspection I saw a glossy black spider with long angular legs. As the shy creature edged out of the corner I spotted it’s bright red mark. It was a black widow to be sure.
My first instinct was to get my eldest son and my camera. I pointed out the spider to him. I wanted him to know what a venomous spider looks like. Then we watched a very old educational YouTube video on black widow spiders. The video is complete with disturbing footage and creepy music and my son loved watching it. Our black widow met her unfortunate end by my shovel wielding husband. Her nest was in a high traffic area and we couldn’t risk her laying hundred of eggs right by our house.
Uncategorized
9 comments
0
FacebookTwitterPinterestEmail
previous post

Wow!
I didn't know those lived in Canada – but the way you went to get your son reminds me of the way my mom raised me too.
Bless you.

this is a very good site.because We learn many things from this site.
thank you very much for post this awesome blog.
spiders

this is a very good site.because We learn many things from this site.
thank you very much for post this awesome blog.

Really amazing post , I am learn many thing by visited the site , Every article are very informational and also awesome, Thanks for sharing

I am always searching for quality posts & articles & this is what I found here, I hope you will be adding more.

I am really glad I have found this information.Thanks for every other informative site.