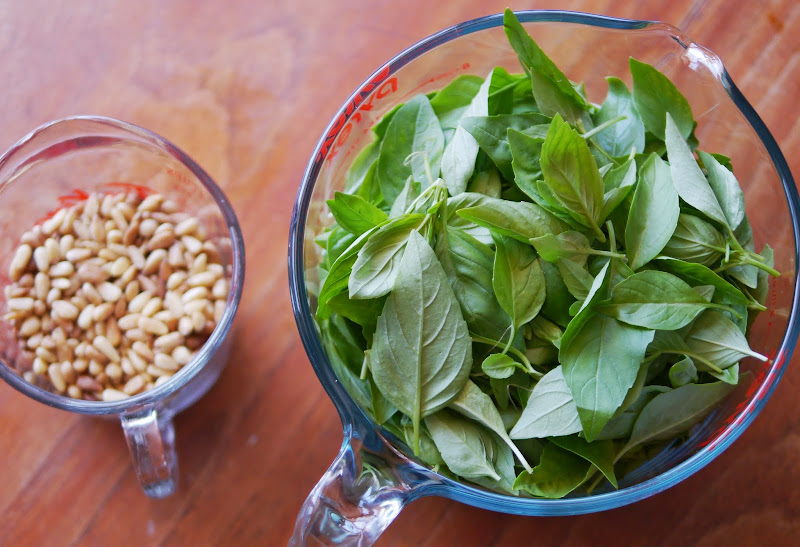 The three most common ways of preserving basil are dehydrating, curing and freezing. It’s worth considering how you plan to use the basil before preserving it or you could experiment with each way to discover what you prefer. Dehydrating basil is inexpensive and space efficient, but much of the flavour is lost during the process. This is why dried basil does not compared to the taste of fresh basil. That being said dried basil can flavour myriad of foods and is handy to have on hand. Curing basil in salt and oil seems to be a Italian tradition, correct me if I’m wrong, but it is in the same vein as herbes salees, a French tradition for preserving fresh herbs. I’ve never tried to preserve basil this way but I’ve done this with parsley and it’s a great way for adding flavour to soups and stocks, among other things. Curing uses a lot of salt which some people might not like. Freezing basil is the best ways for preserving its flavour. To freeze basil you can food process it with some olive oil until it forms a thick paste and then freeze in ice cube trays. By adding a few other ingredients to the food processor you can make pesto, which is a great thing to have stashed away for those cold winter days.

A couple notes: When making pesto with the intent on freezing it there are a couple things to consider. The first is blanching. I’ve noticed that some people insist that blanching preserves the colour of the basil, reduces bitterness and gets rid of enzymes that might break down the herb. I skipped this step, maybe I’ll regret it later, but you can decide if you want to do it. The other consideration is cheese. Pesto freezes better without cheese, so I omitted it. It can be added later on when you are using the pesto.

August 2013 update: After blanching a batch of basil I noticed that it does decrease the bitterness and preserve the bright green colour. I’m not sure if it will make a big impact when we consume the pesto later.

Start by toasting the nuts if that hasn’t been done already. (Optional) Blanch the basil by submerging the leaves in boiling water then immediately strain and rinse until cold water. When the nuts have cooled put them in a food processor along with the basil, garlic and salt. 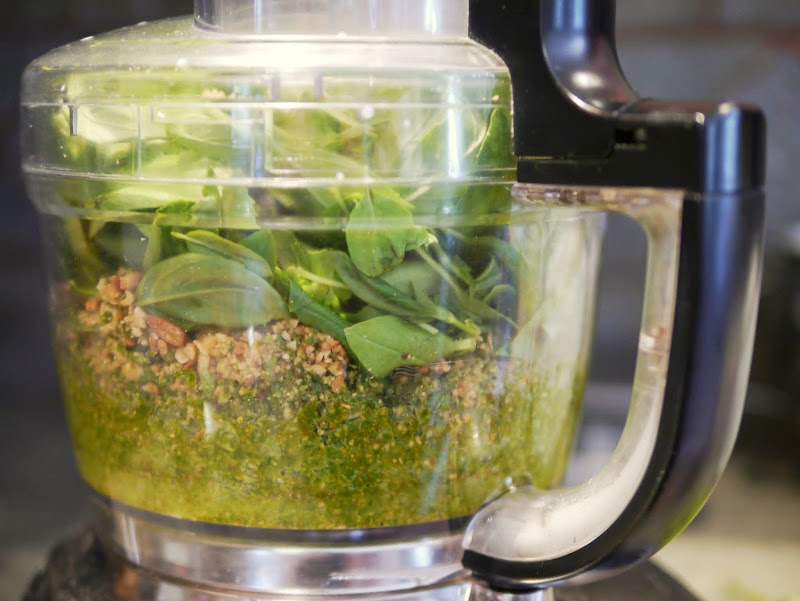 Process until a thick smooth paste forms. While the machine is running pour the oil in. Divide the pesto into jars or containers and cover top with a thin layer of olive oil. Freeze immediately. 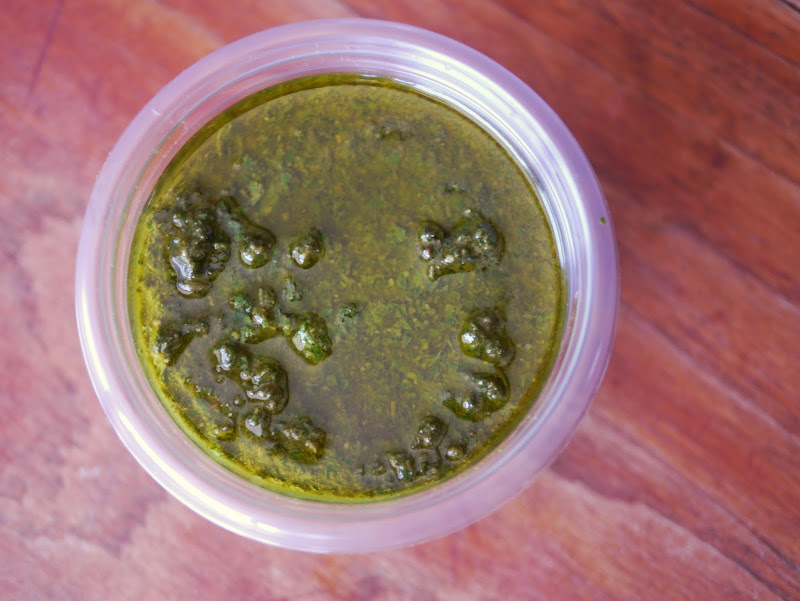 I'm going to try make basil jelly with some of the Basil I'm growing this year. Its like mint jelly but using basil instead.

Yum!! We love pesto, and always freeze some for the winter.

just did this today! I froze mine with the cheese though – I've done it before with what I deemed satisfactory results and I didn't want the hassle of having to add it later. I always substitute pepitas (pumpkin seeds) for the pine nuts or walnuts.. my oldest has a tree nut allergy so can't have walnuts, and I had a bad reaction (Google "pine mouth"!) to pine nuts a couple of years ago so I avoid those too. The pumpkin seeds have a bit different texture but make good pesto anyway, for anyone who needs to avoid other kinds of nuts!

Love pesto! I'm hoping to make it this year. We've typicality substituted the pine nuts (so pricey!) with sunflower seeds (fresh roasted). They seem to have an almost identical taste. Thanks for the tips!

Hi Josee,
This is a great post and your Basil Pesto looks delicious. Hope you are having a great summer weekend and thank you so much for sharing with Full Plate Thursday.
Come Back Soon!
Miz Helen

Congratulations!
Your recipe is featured on Full Plate Thursday this week. Hope you are having a great weekend and enjoy your new Red Plate.
Come Back Soon!
Miz Helen