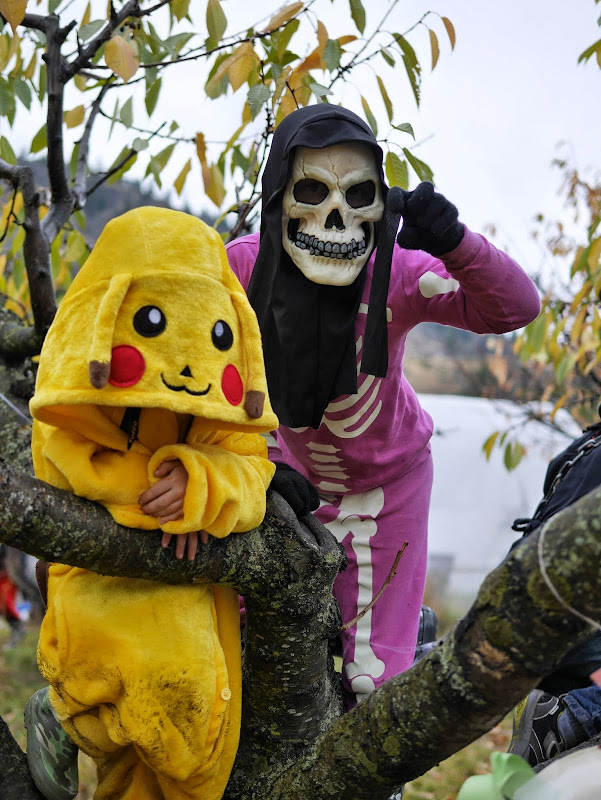 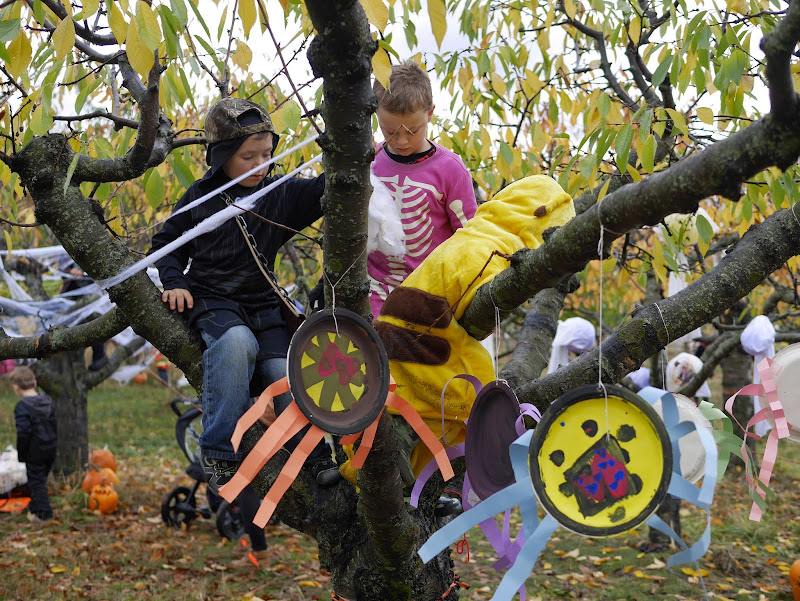 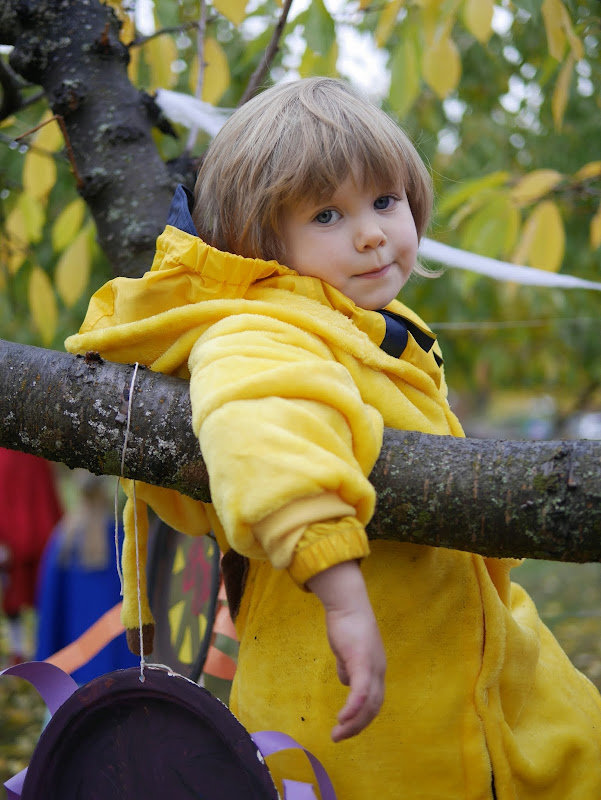 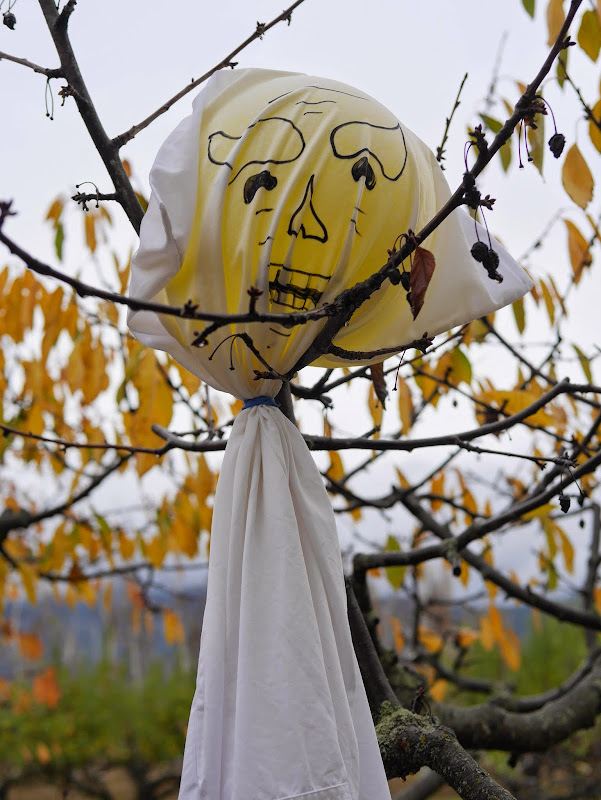 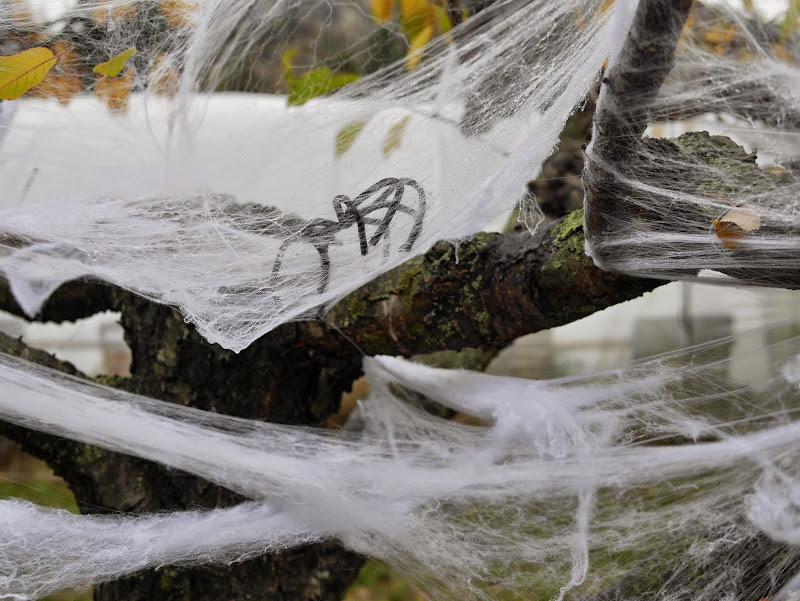 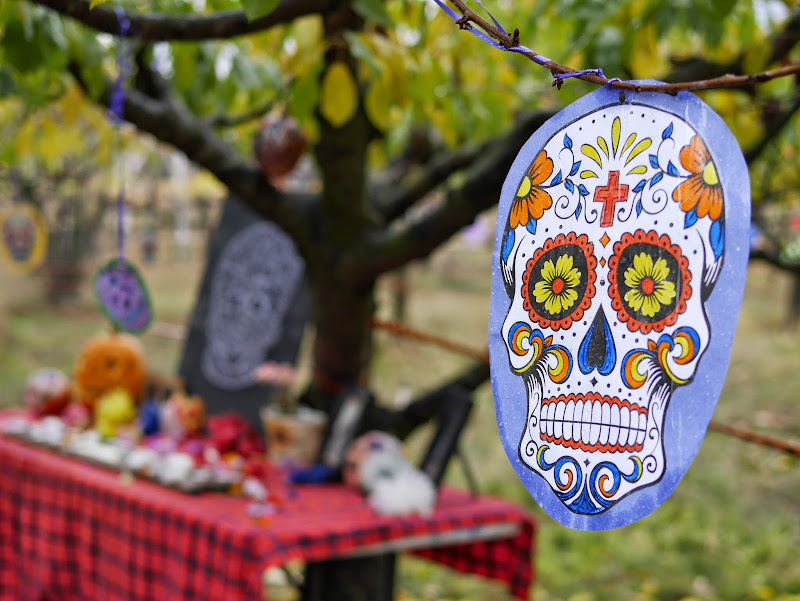 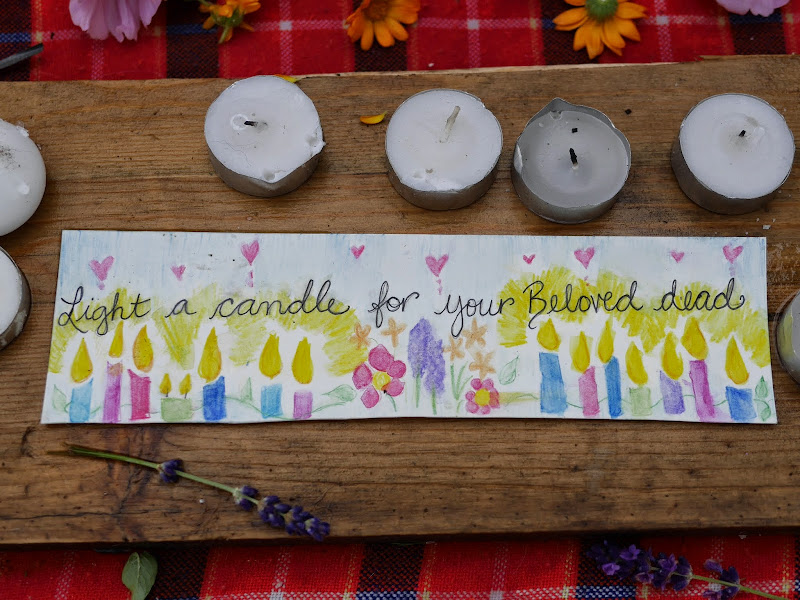 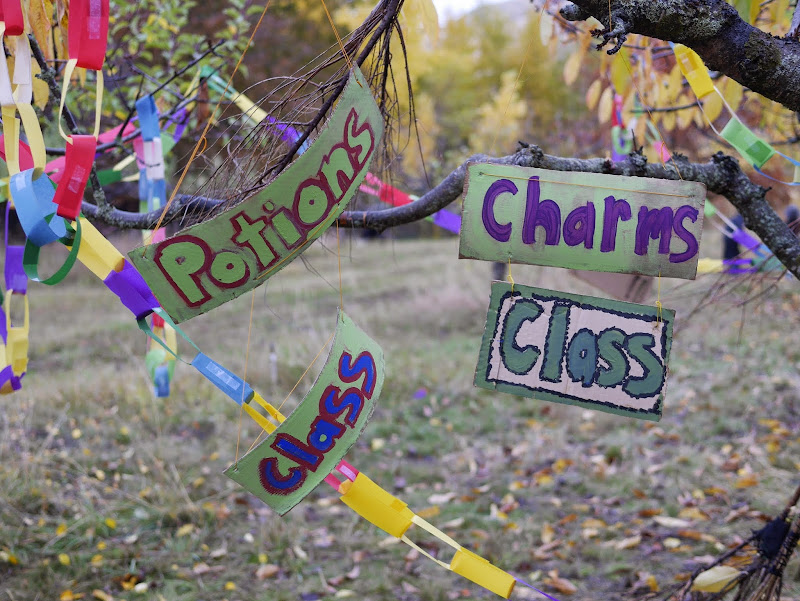 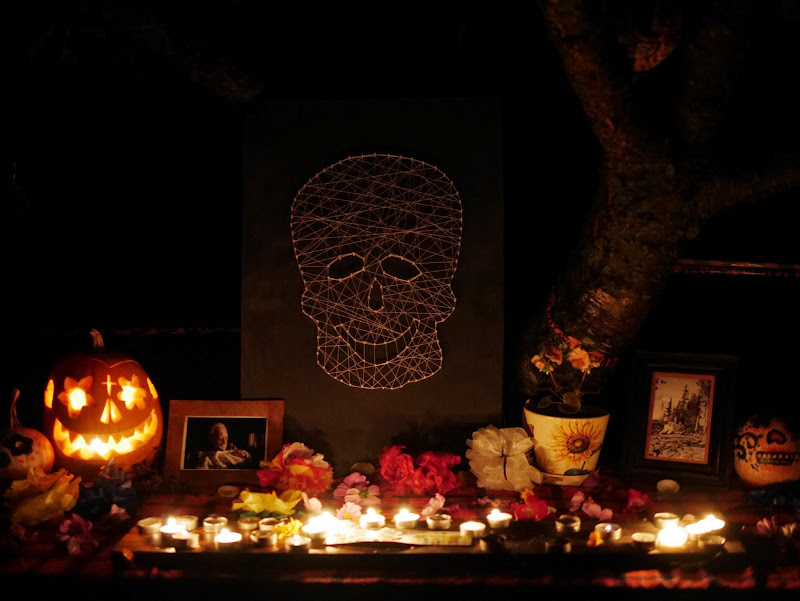 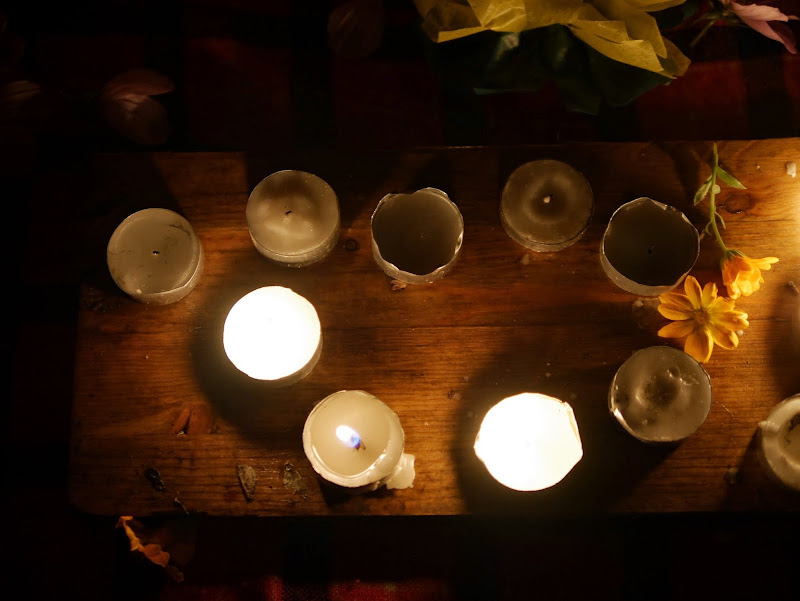 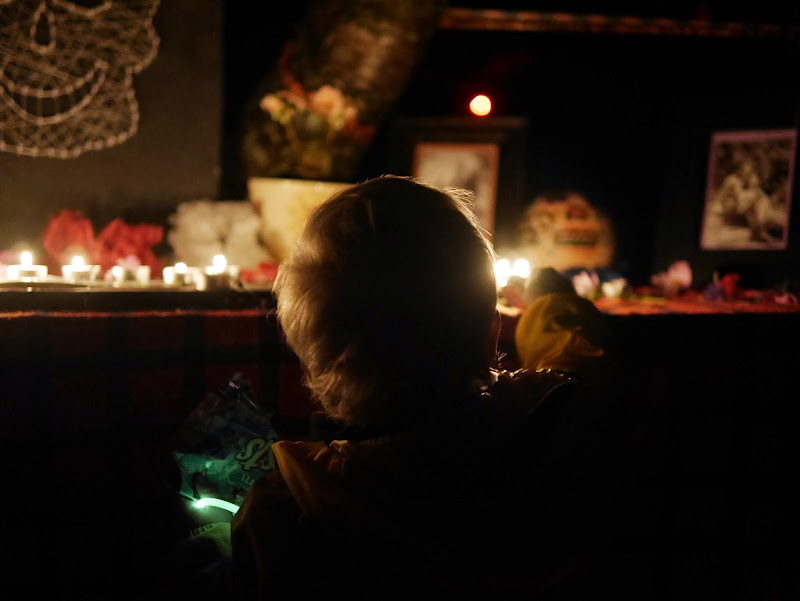 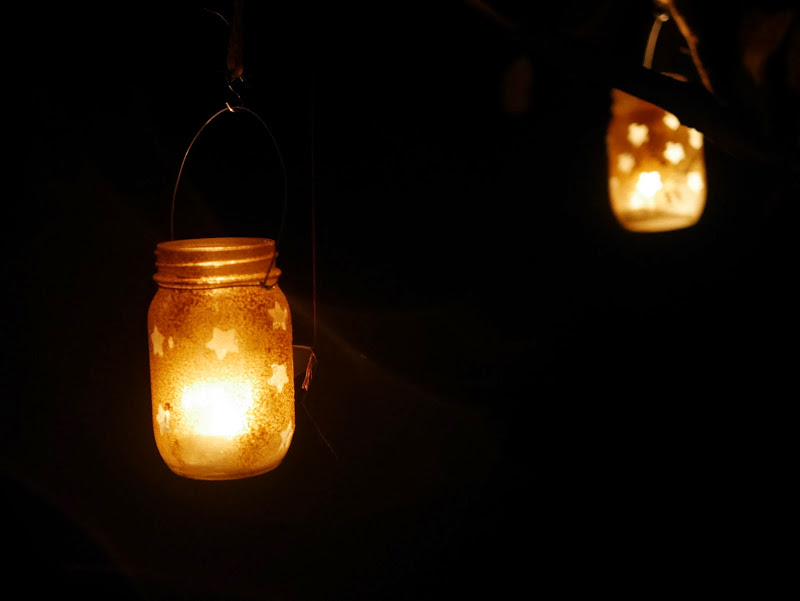 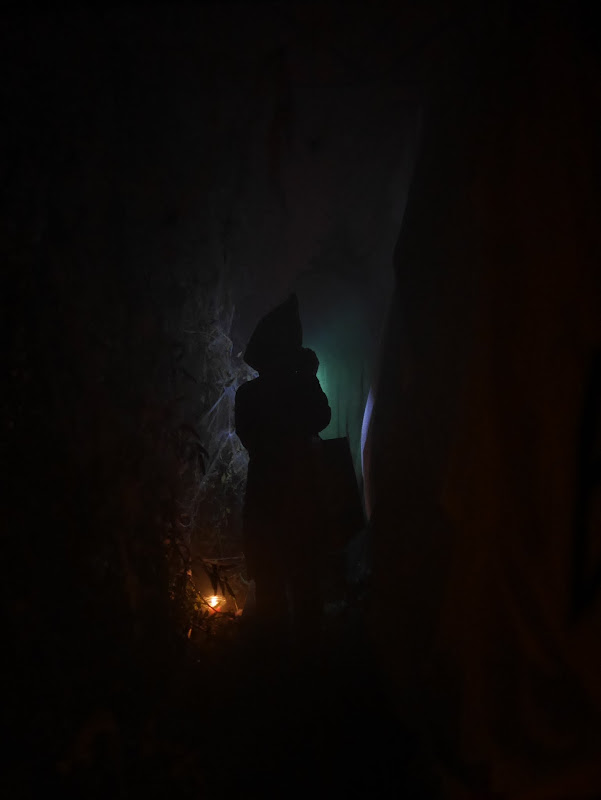 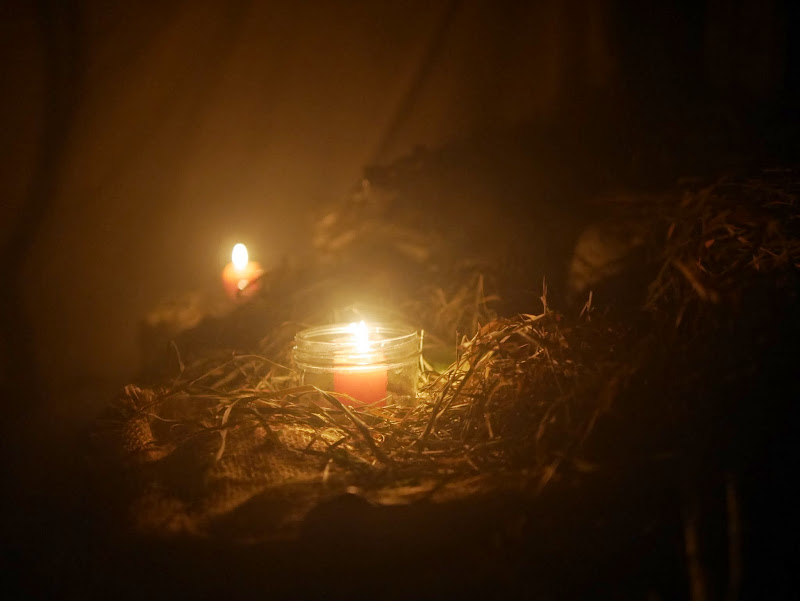 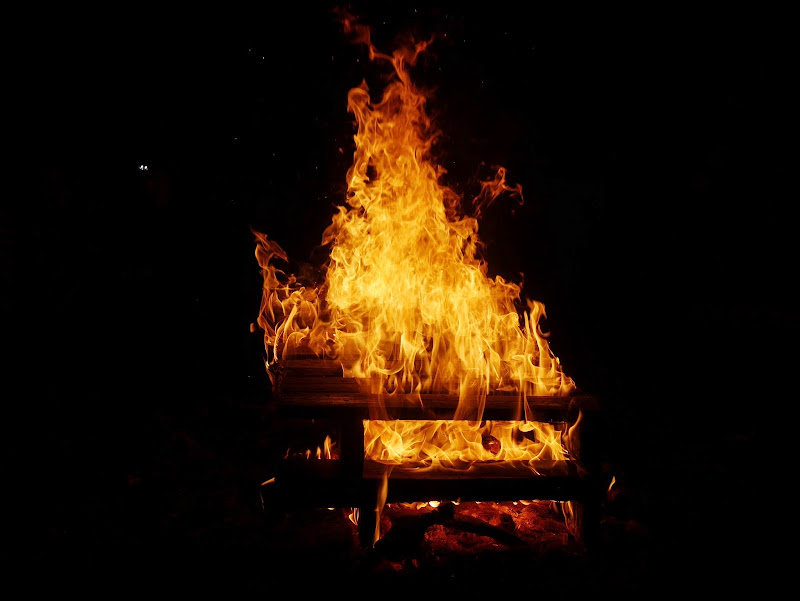 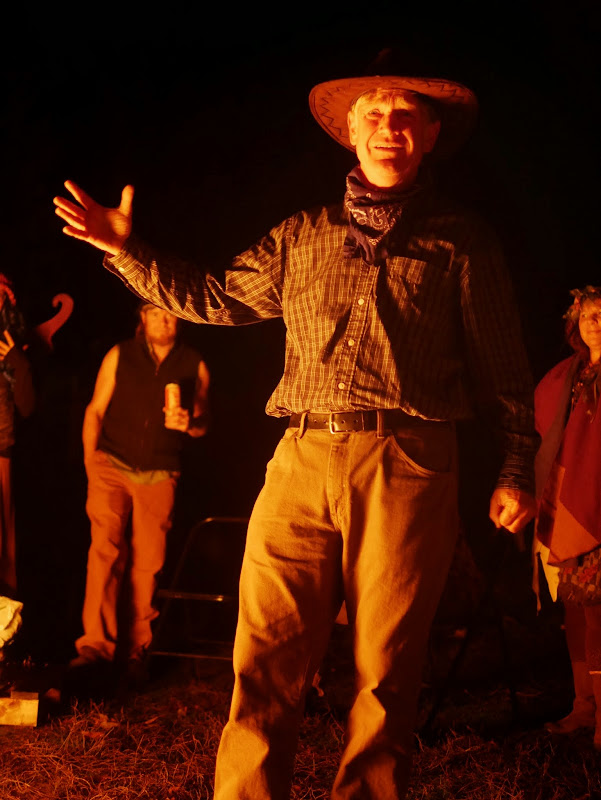 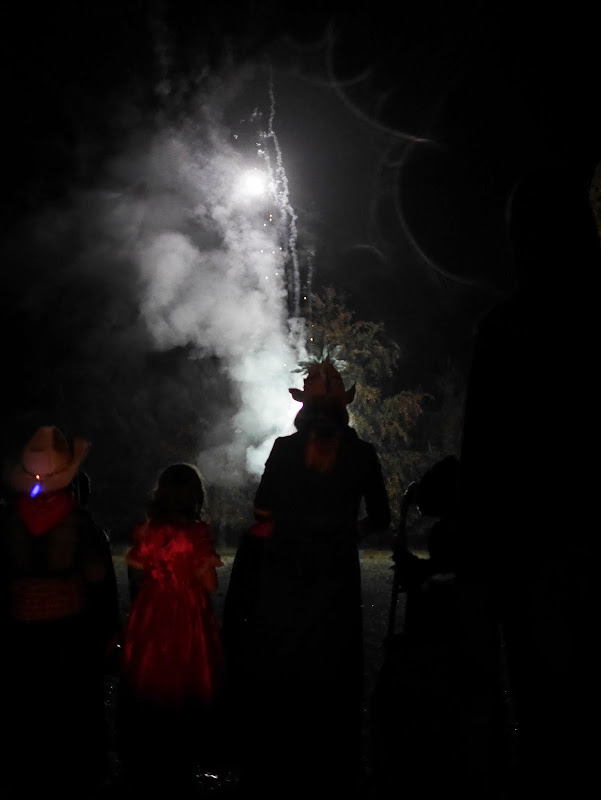 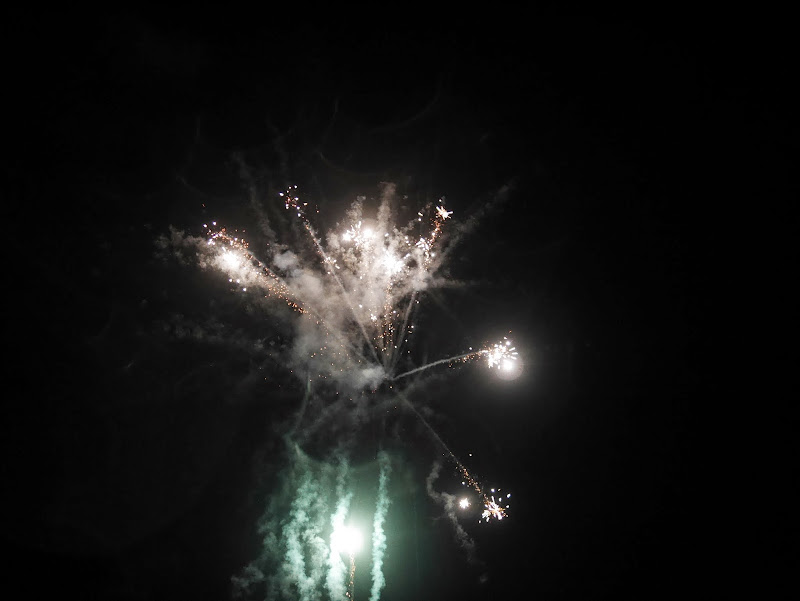 Everyone was a little worried about the weather. A forecast of rain can dampen Halloween spirits but our community was determined and came out in full force to brave the elements. When we arrived at the farm there was a short deluge and then we had a break from the rain to enjoy fun and games.

A variety of games were organized for the children. Each child had a passport that they carried with them to have filled as they completed each activity. I prepared the classic doughnut-on-a-string activity along with the soul cake song:

A soul! a soul! a soul-cake!
Please good Missis, a soul-cake!
An apple, a pear, a plum, or a cherry,
Any good thing to make us all merry.
One for Peter, two for Paul
Three for Him who made us all.
As I was preparing my station I heard yells and screams. At first I dismissed them as Halloween festivities because our group is known to get rowdy at times but something about the screams drew me toward the commotion. As I approached my friend called to me to hurry as my eldest had an accident. By the look on her face and the screams I heard earlier I knew instantly that this was serious and ran as fast I could to reach him. He had been climbing on a stack of pallets that had just been unsecured from a trailer. The stack of pallets tipped and fell on top of him. It was all hands on deck and he was already taken out and being assessed by the time I reached him. A retired paramedic was checking him out, my nurse friend was helping out and keeping me rational, there was ice, there was chocolate, there were reassuring and healing touches and much love and compassion from everyone. My son sustained a blow to his ear and was quite shaken up but seemed otherwise untouched. My heart was being crushed by the pain that a mother feels when their child is hurt, like this picture of Our Lady of Sorrows. As the minutes passed he seemed to recover and after about an hour he was eager to participate in the festivities again. It was a traumatic event for everyone there but I could not ask for a more loving and attentive community. I just feel so very blessed, and I want to share my most heartfelt thanks to everyone there.
So as I was keeping a watchful eye on my eldest my two younger ones were enjoying the festivities in the hands of wonderful friends. I was not able to capture any of these fun things with my camera but it sounded like the children were really enjoying themselves.
After the potluck dinner the children were eagerly awaiting the orchard walk and the haunted greenhouse. There is a small orchard at the farm and families prepare decorations to transform the trees into a magical place that the children journey through after the sun goes down. This year there were spiders, lanterns, skeletons, pumpkins, balloons and a beautiful table celebrating those departed before us. My children made some paper plate spiders to decorate a tree. When darkness descended the parents placed themselves throughout the orchard to provide treats to the children as they walked through. It was delightful.
Next the children and adults braved the haunted greenhouse which was decorated and spookified by the older children in our community. My son and I held hands as we walked through. I got jumpy when a child reached through dying tomato vines and grabed my ankle – eeek! There was even a bit of a fire in there at one point but it was quickly controlled and nobody was hurt. It was thrilling! My son and I walked through the haunted greenhouse three times before rejoining everyone at the bonfire for some story telling. The storyteller brought to life the exciting and funny story about how Jack outsmarted the devil and became Jack-O-Lantern.
As the story finished a light rain began to fall but everyone’s attention quickly turned to the stunning fireworks that started to explode in the sky. The sparkles and colours captivated everyone and I felt spoiled by such a display and by being part of such an amazing community.
To read more about celebrating All Hallow’s Eve read last year’s post.
Halloween
0 comment
0
FacebookTwitterPinterestEmail
previous post