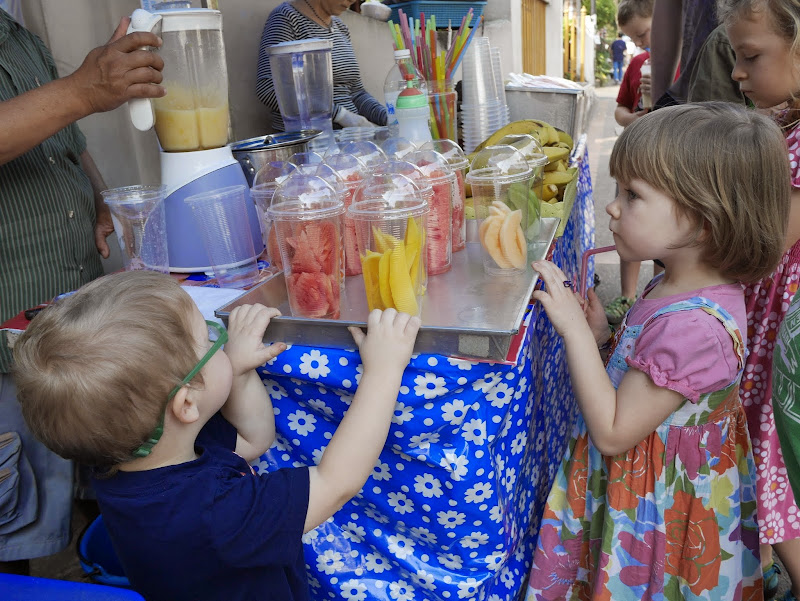 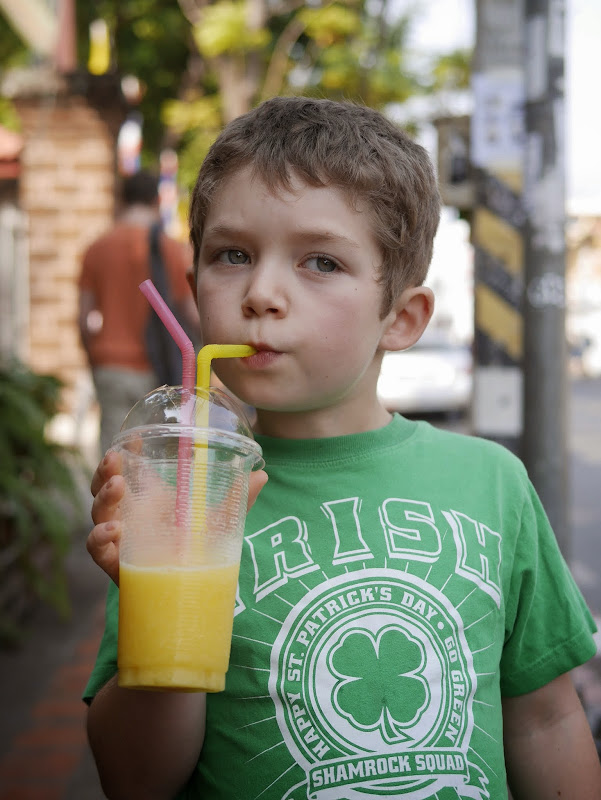 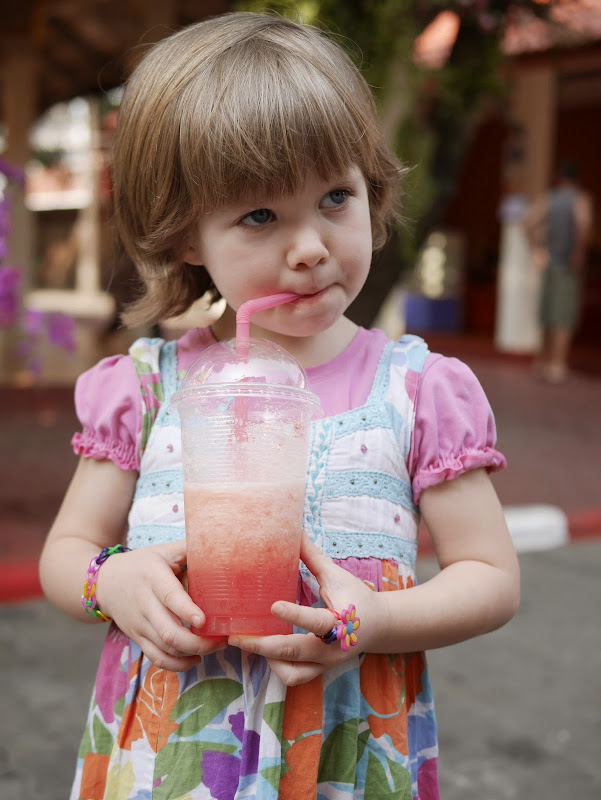 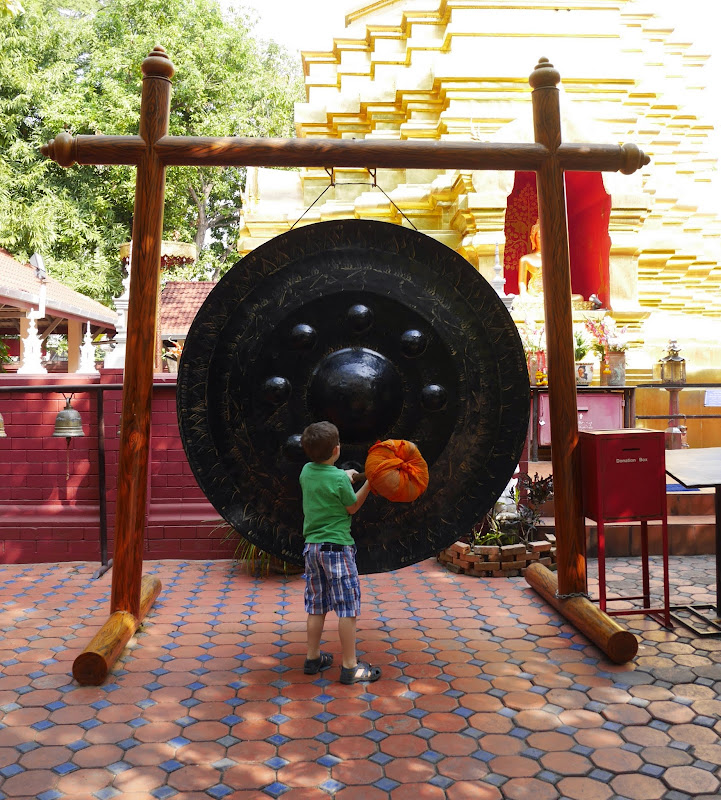 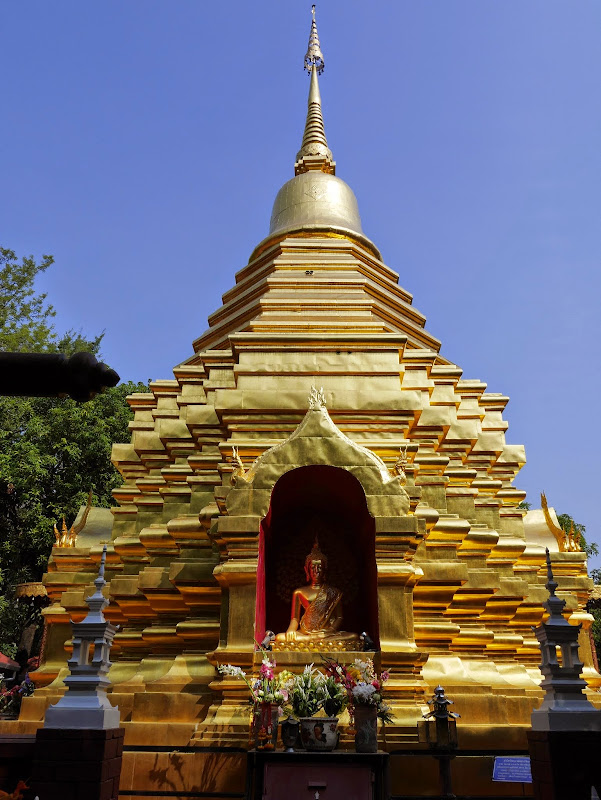 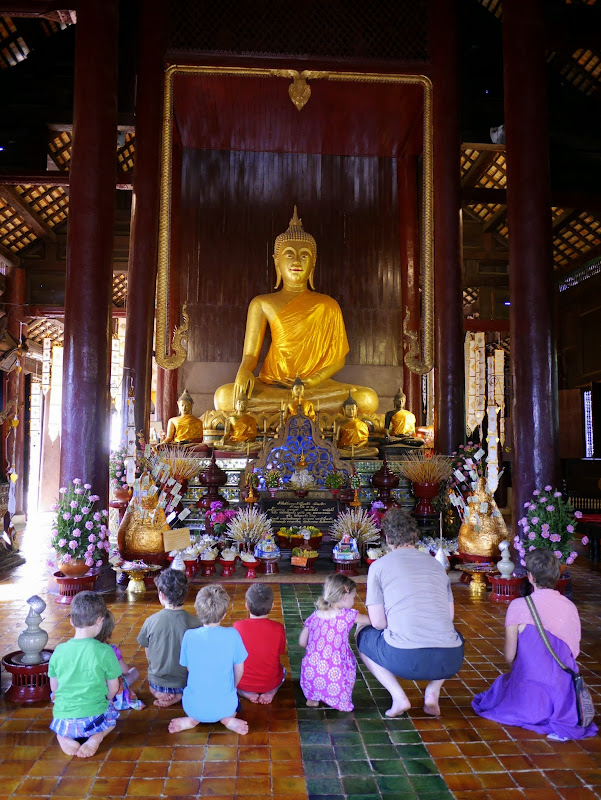 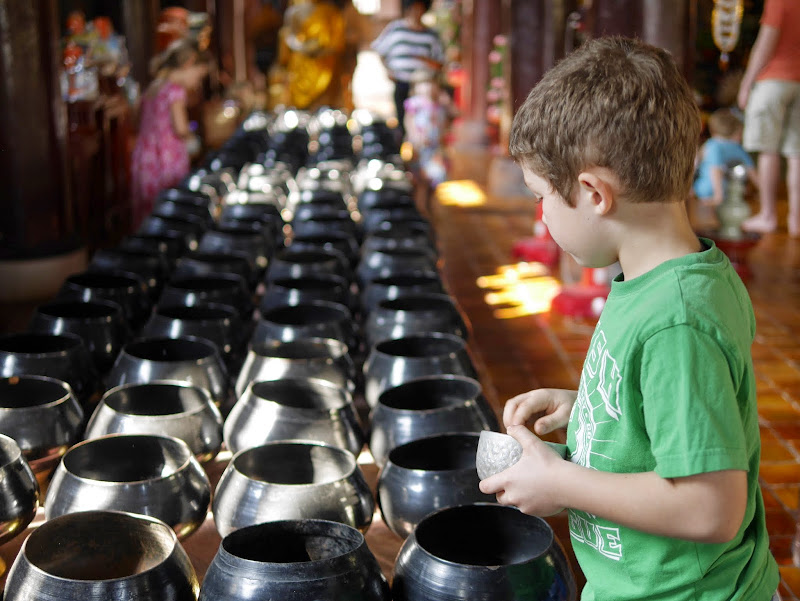 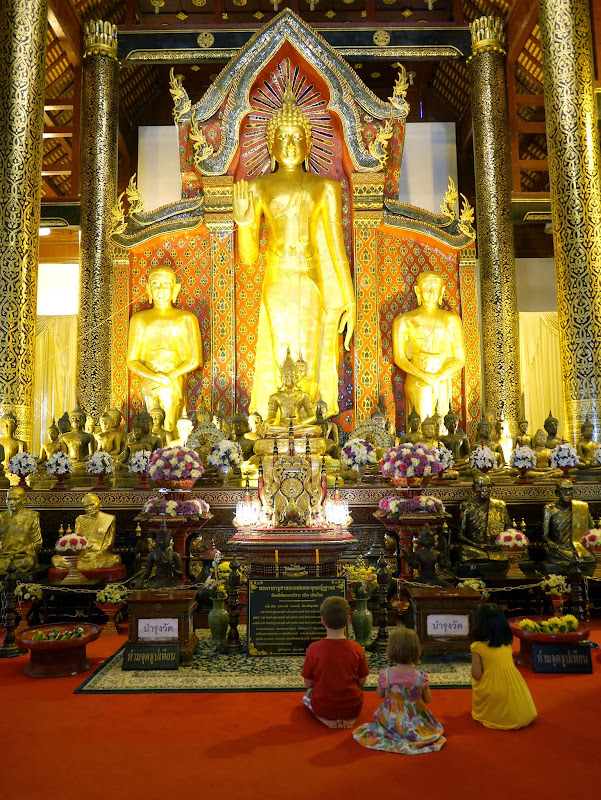 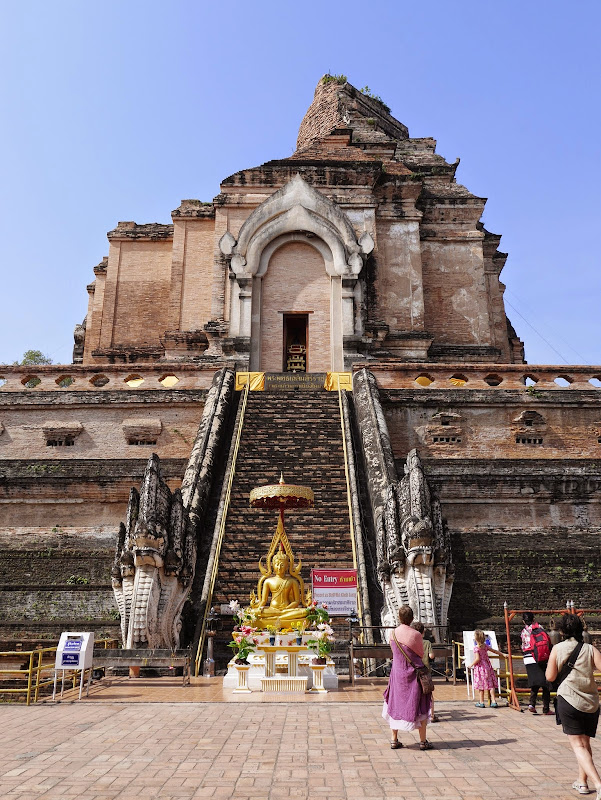 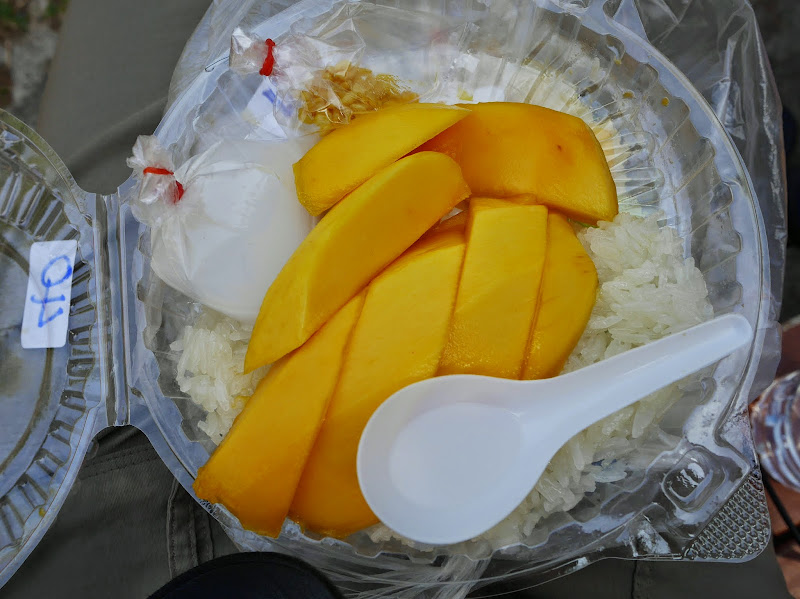 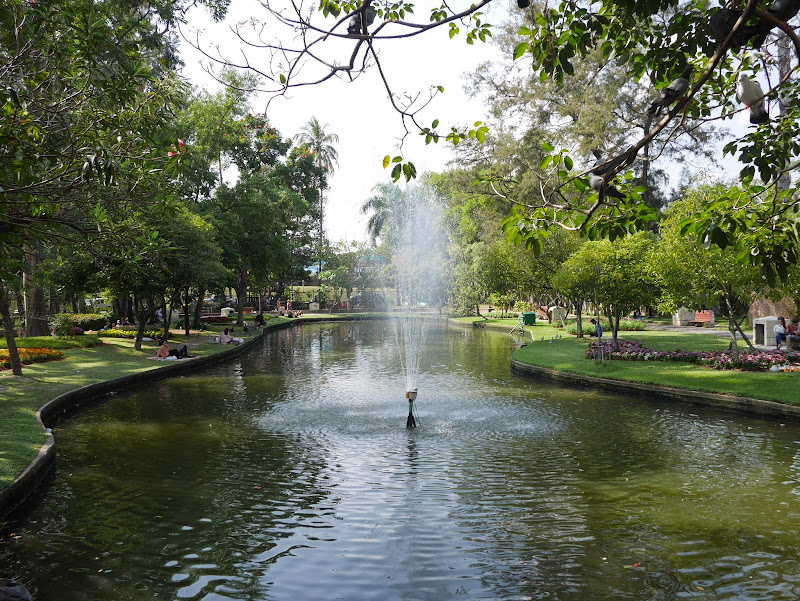 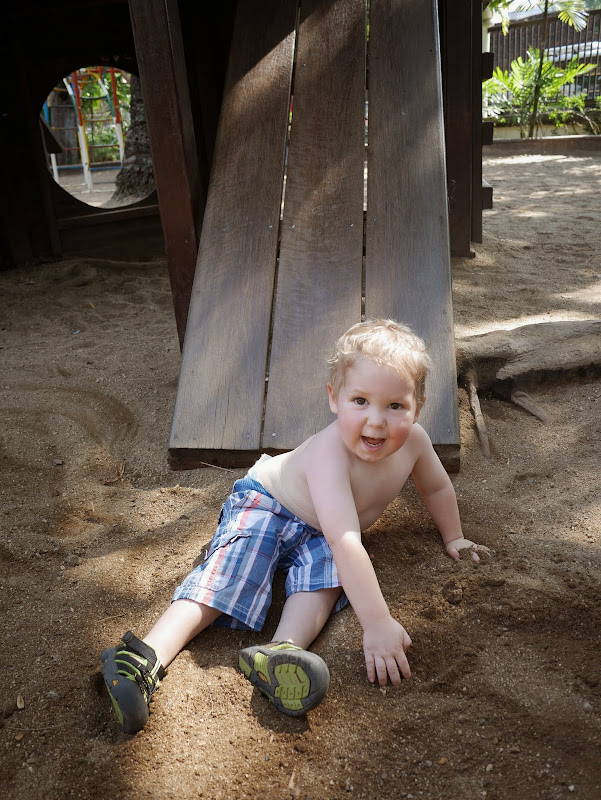 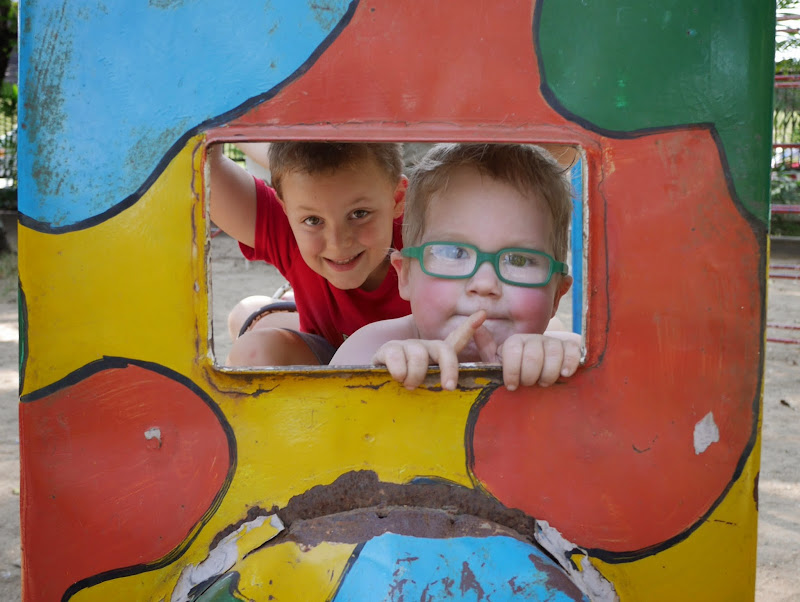 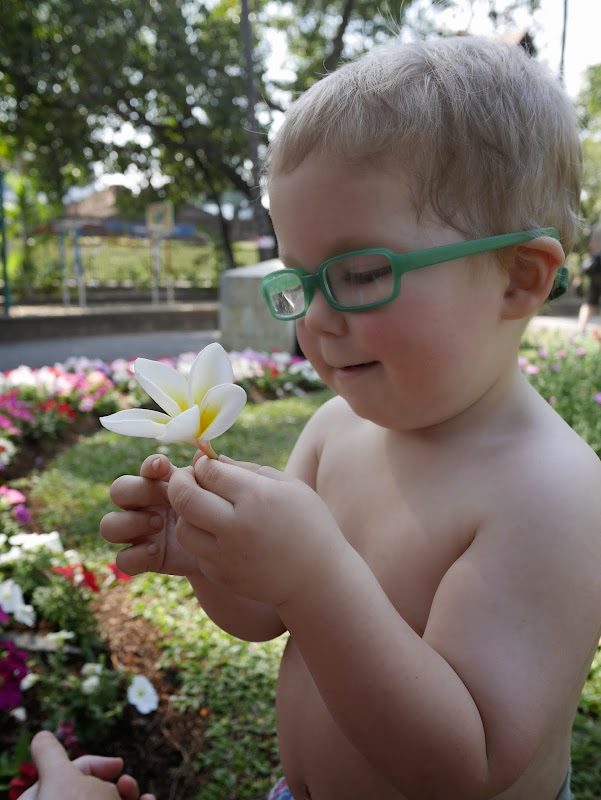 Chiang Mai is located in the northern part of Thailand. It is surrounded by hills that we aren’t able to see at the moment because of smog in the air. The centre of Chiang Mai is enclosed by the remains of an ancient wall and moat. These ancient walls were built over seven hundred years ago and they protected the city’s many Buddhist temples many of which are still present today.

For most of the day we explored various areas of the old Chiang Mai. Our hotel, Mandala House, is located just east of Thapae gate, which is the main gate. There are so many cars, motobikes, songthaews and tuktuks on the streets that crossing roads, especially near the ancient walls and gate, can be just plain hazardous with a gaggle of kids. Somehow we made the crossing safely… numerous times. As we walked down Rachadamnoen road we stopped for a fruit smoothie at a street vendor. The fruit here is amazing, so intensely sweet and juicy. We enjoyed mango and watermelon smoothies as we walked through our first Wat.

A Wat is a Buddhist temple. It is a place of worship so we explained to our children to show respect in these spaces in the same way we ask them to do so at church. Before entering a Wat everyone’s shoes need to be removed and shoulders covered. My children sat in front of the Budda statue with their feet tucked behind their bottoms to show respect. The first Wat we visited was Wat Pan On. This Wat was built in the fifteen hundreds and has a large gong that the children enjoyed sounding. After Wat Pan On we turned down Prapokkloa road and stopped at Wat Pan Toa which is made out of ancient teak. At this Wat the children gave alms to the monks by dropping coins into a long table of metal bowls. Most, if not all, men of Buddist faith live as a monk for a period of their lives.

Our next stop was Wat Phra Singh which is a major temple and monastery. It was built in the thirteen hundreds and is known as the temple of the Lion Buddha. It is a beautiful Wat covered in gold and red in. It was difficult to capture this Wat with a mere picture. As we walked around the back of the Wat we could hear the monks laughing inside the monastery. At the back of Wat Phra Singh is the majestic Wat Chedi Luang which has fallen into ruin after a severed earthquake many centuries ago.

After visiting three Wats our children were getting restless so we walked south towards the indoor market which is at the end of Prapokkloa road. Here we purchased some sticky rice and mango and carried it with us down Changlor road to the Buak Haad city park. At this point in the day it was starting to get quite hot and Teddy was fading fast so we popped into 7-11, of which there are many of everywhere, and purchased some popsicles for a quick energy boast.

The Buak Hadd park is situated in the south west corner of the old Chiang Mai. It is a nice outdoor space with tress, flowers, a pond, bridges, play park, benches and a couple shops. Our children enjoyed playing on the play set and feeding the pigeons and fish. They even spotted a turtle and a giant catfish lurking in the murky pond waters. We stayed at this park for a while and relaxed in the shade of the trees. After a while we took our leave and pilled into a songthaew to get back to our hotel and relax after all that exploring.

From Bangkok to Chiang Mai