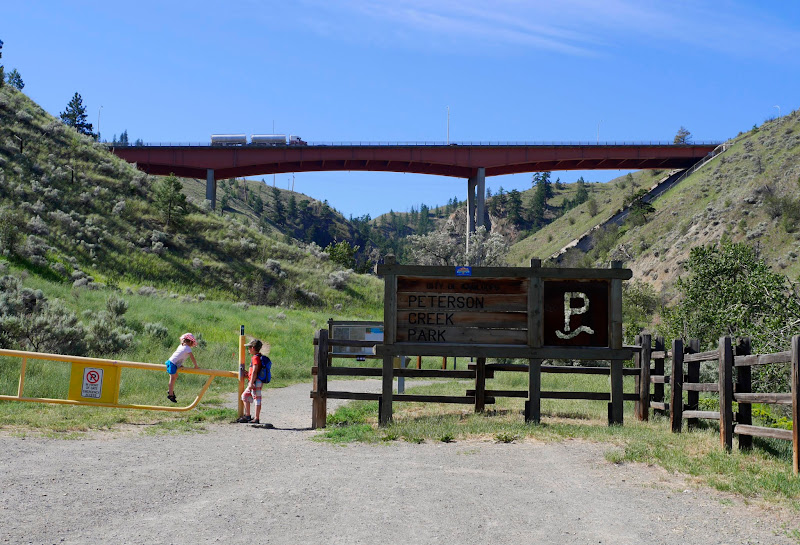 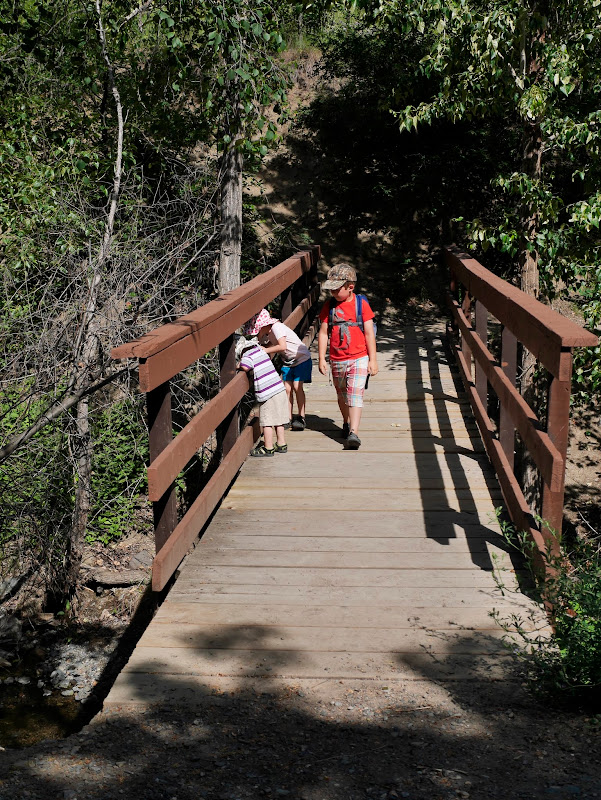 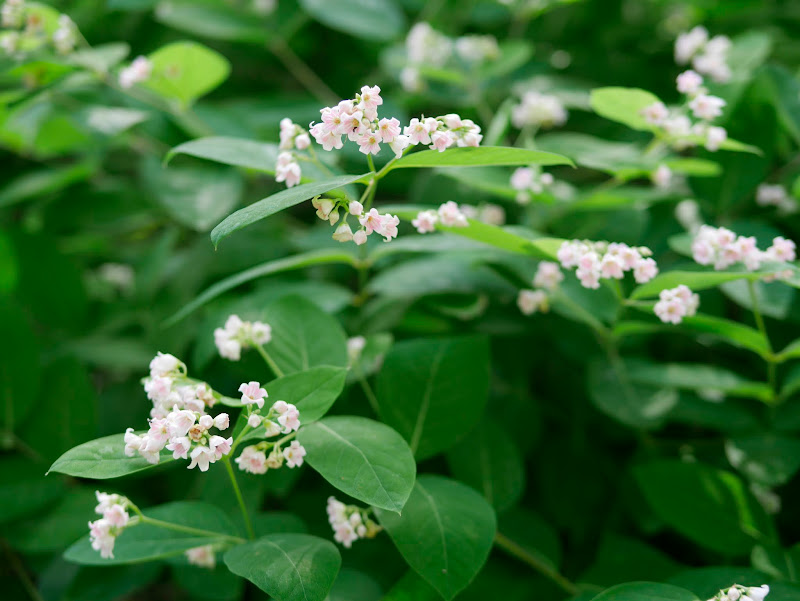 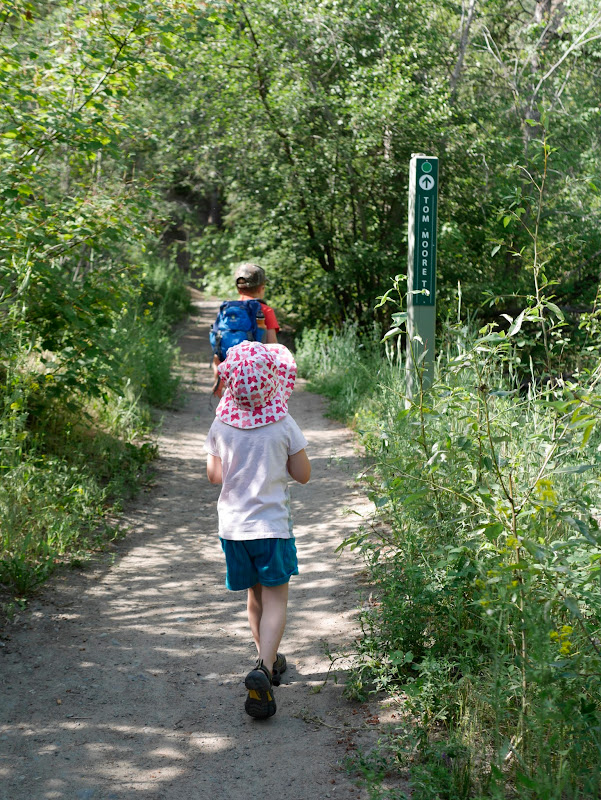 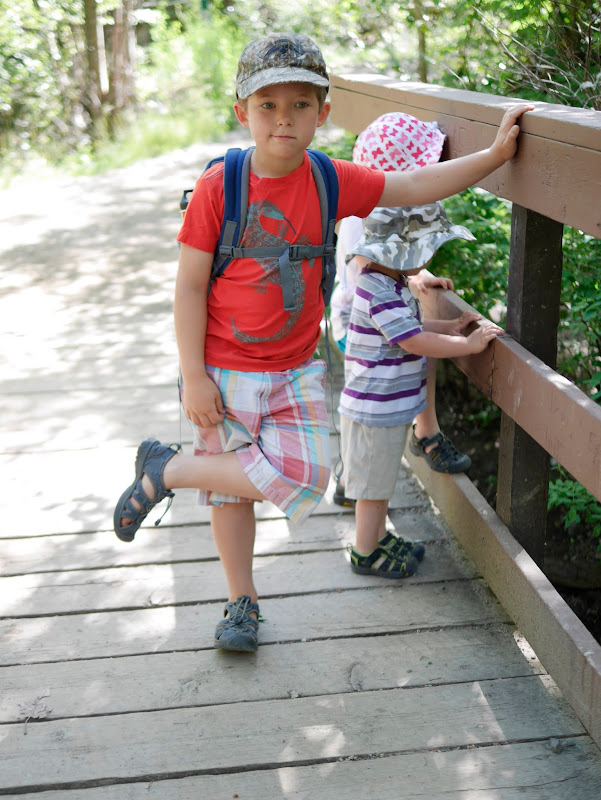 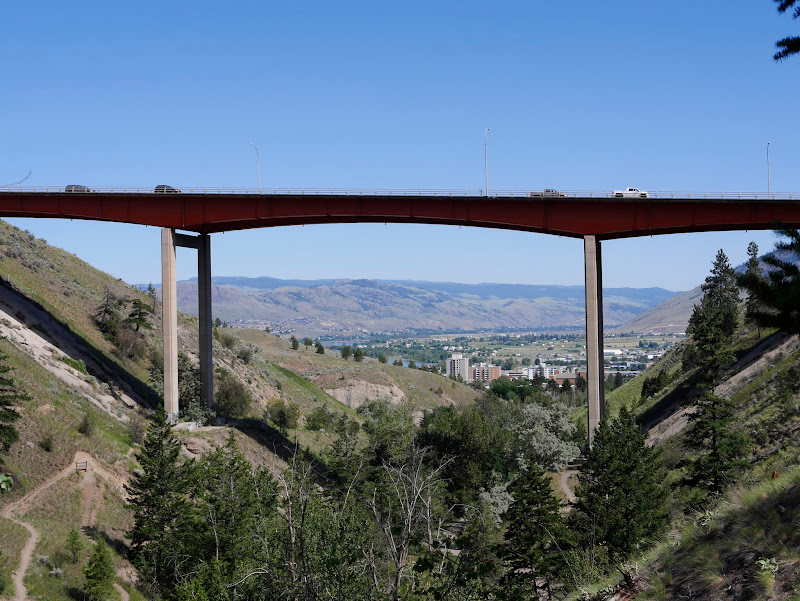 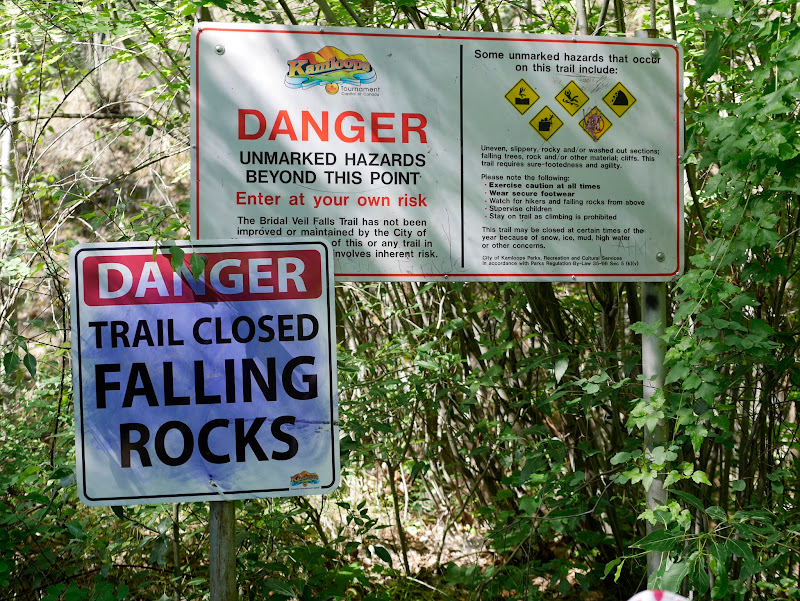 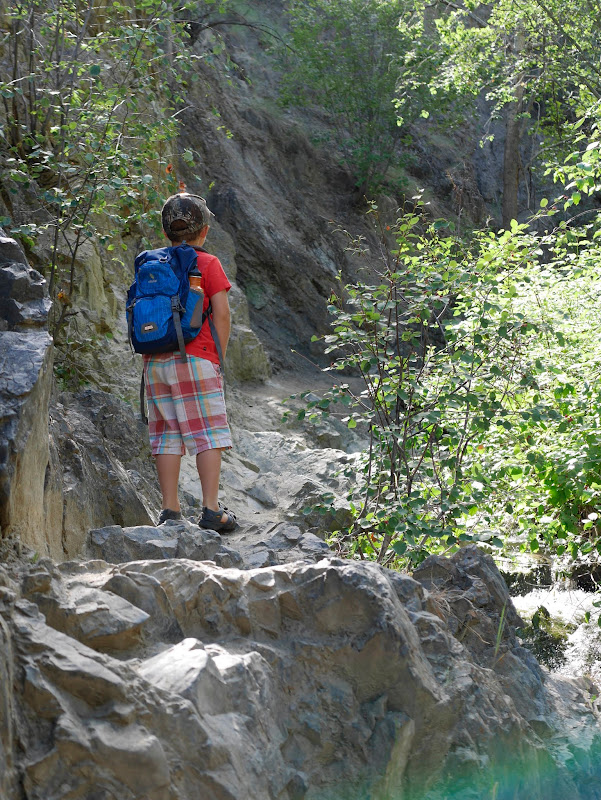 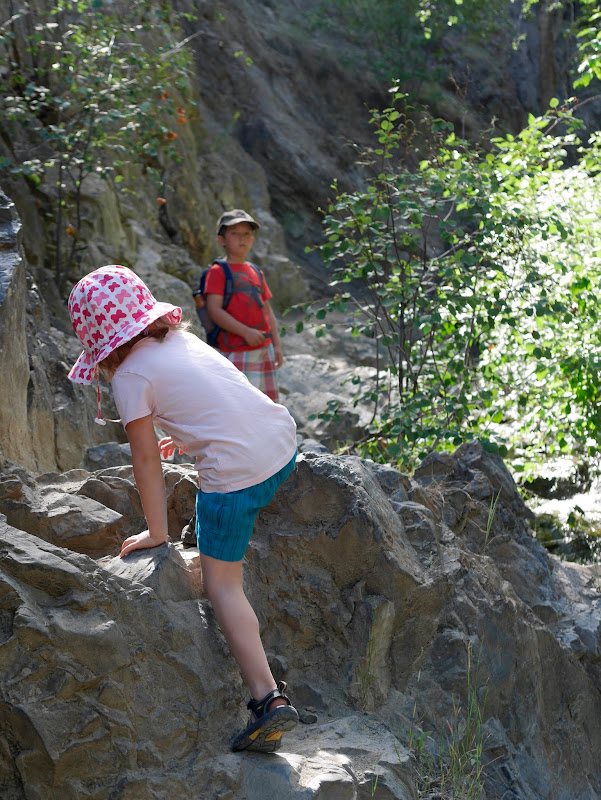 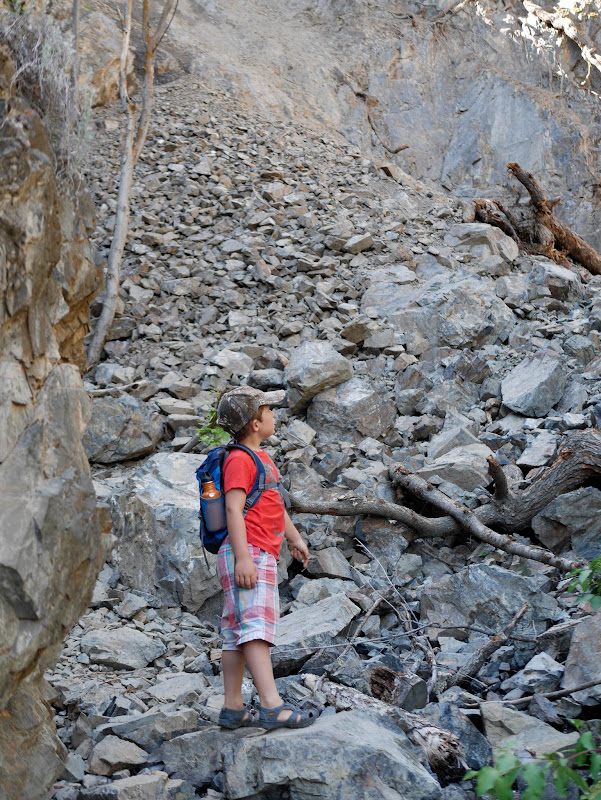 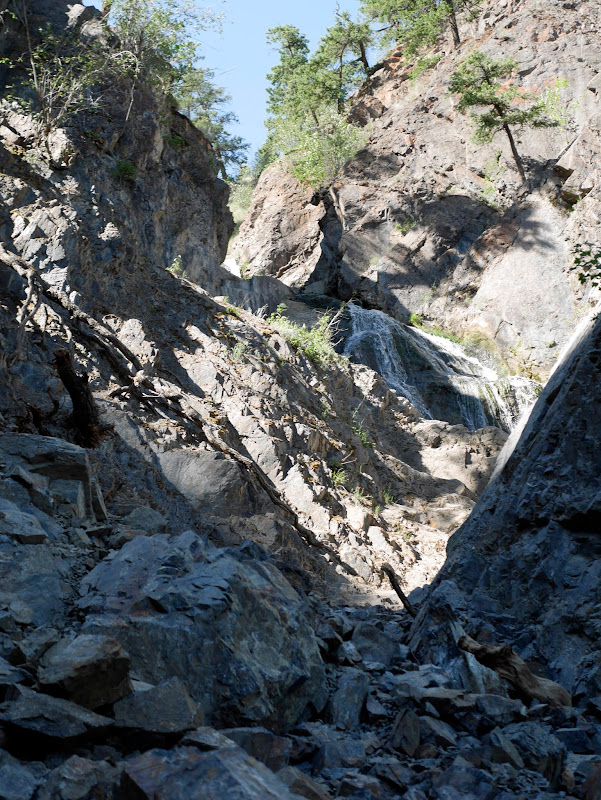 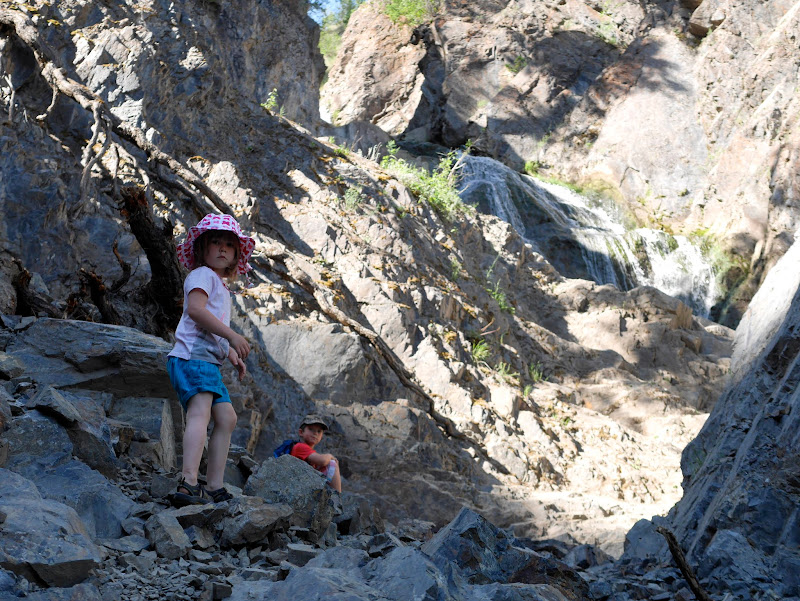 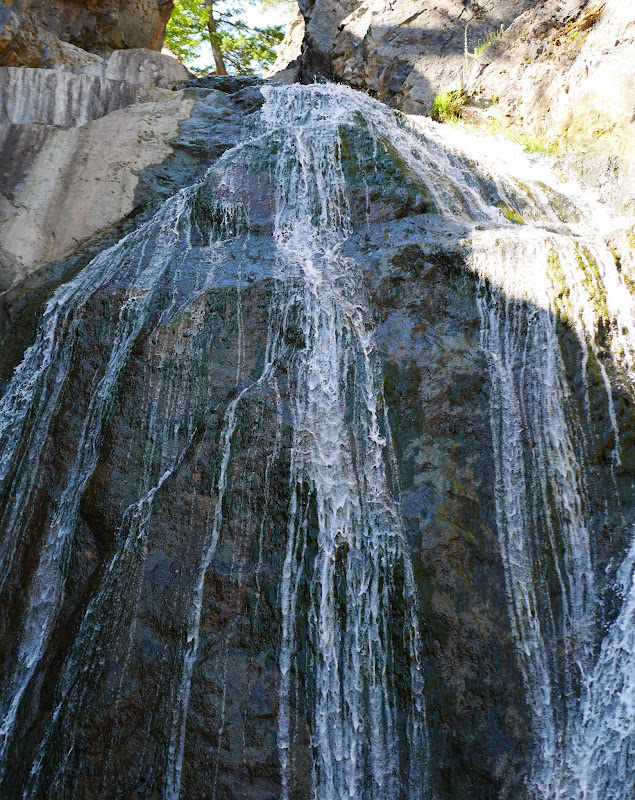 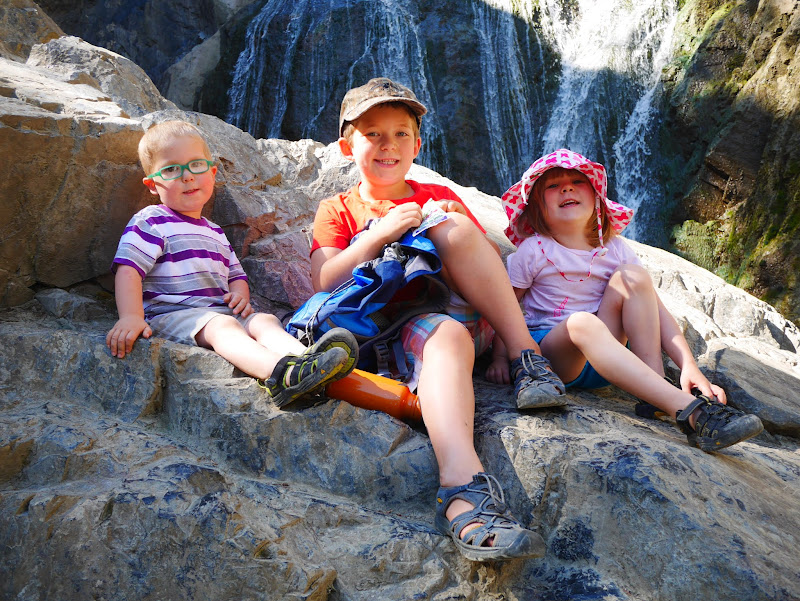 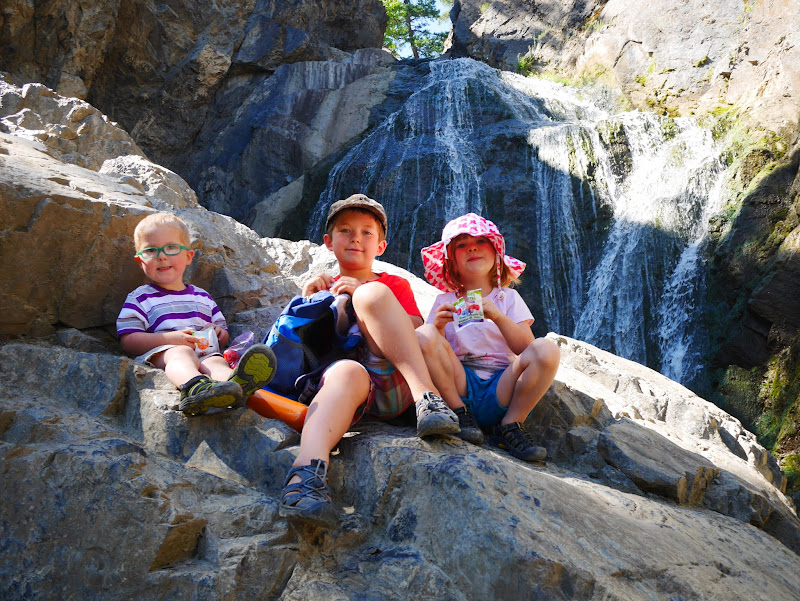 On our way back from Prince George we stayed a couple days in Kamloops. On our last visit to Kamloops we explored Kenna Cartwright Park. I would have liked to explore that park a little more but felt that my children would enjoy something different. After a little research I discovered the Peterson Creek Nature Park. This park is open year round, from 8:00 am to 8:00 pm, and encompasses one-hundred and twenty-four hectares of land. Throughout the park there is a large network of well marked trails for hikers and cyclists to enjoy.

There are nine entrances to the park. We started our adventure at the most north entrance, the Tom Moore Main Entrance. This entrance is tucked behind the Kamloops courthouse on Glenfair drive. The beginning of the Bridge Trail is wide, flat, gravely with a slight incline. I almost regretted putting Keen sandals on my children at this point because they kept on getting rock stuck in their sandals. However, as the trail passed under the bridge and towards a more forested area the trail began to narrow and became hard-packed dirt. We passed a couple wood bridges that crossed over the creek and explored parts of the Creekside trail.

We continued to follow the Tom Moore trail until we came upon a rather menacing sign warning us not to proceed any further. Going past the sign would take us to Bridal Falls but I was unsure about the severity of the rock slide so I decided to backtrack and follow a trail up the right side of the valley. With the heat steadily increasing I knew that this trail would not be a good idea for my children, it was too exposed, so we came back down and tried the left side of the valley with no better result. Then we found ourselves staring at the warning sign once again and decided to see what it was like on the other side.

The trail narrowed and then there was no trail. My three children and I clambered over rocks and carefully treaded over a large slide of sharp rocks. This was no easy feat and I can say with confidence that my eldest son was the main reason we were able to make the trek in. He helped me maneuver the younger two up rocks and through the rock slide. As we turned the corner there we saw Bridal Falls. My children were ecstatic and so was I. We had a snack on a large rock near the falls then carefully made our way back. As we stopped by the creek we heard in the background rocks crashing down behind us. The warning sign should be heeded! I was grateful nothing fell on us.

There is something special about adventures as a family. When we started the hike my children were full of complaints. Yet on the way back they were pumped that we had this adventure together and so excited by the risks we had to take to see the waterfall.

Watersports at the Cabin

You are so brave I shiver at what could have happened. Thank God you are safe and sound. Next time I hear from you will be I am quite sure finally home Okanagan falls. Remember last year we had a Barbecue in our garden. It was wonderful. Hopefully we can do it again with your mom and dad.

Yes, I am grateful that we were safe as well!