What I’m Reading in June 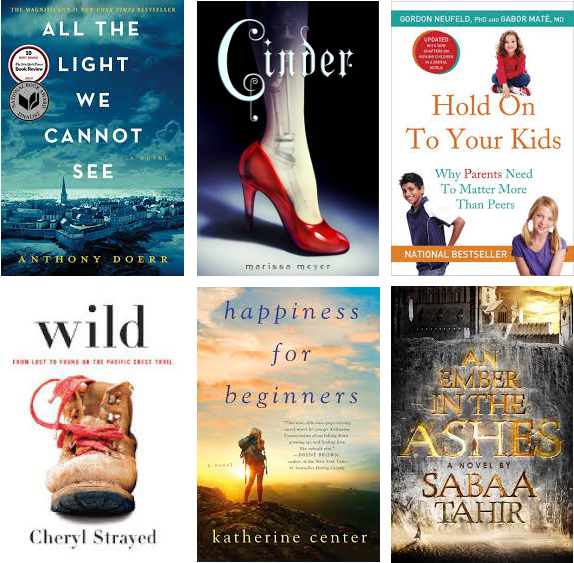 All the Lights We Cannot See by Anthony Doerr

Set in WWII, this is a story about a young blind French girl and a German boy who develops a talent for building and fixing radios. Their stories are told in parallel moving forward and backward in time until finally their paths collide in Saint-Malo where there are terrifying bombings and fires. A beautifully written book.

Set in the futuristic city of New Beijing, these young adult fiction novels begin by following Cinder, a cyborg and mechanic who despises being treated with disdain and contempt by almost everyone, especially her unfeeling stepmother. Each of the Lunar Chronicle Books loosely follows well known fairy tales: Cinder, the story of Cinderella, Scarlet, the story of the Little Red Riding Hood and Cress, the story of Goldilocks, while simultaneous incorporating elements of science-fiction and fantasy. These books are highly addictive. Two new installments are being added to the Lunar Chronicle book series this year: Fairest released in January 2015 and the conclusion to the series Winter which is being released November 2015.

Hold Onto Your Kids: Why Parents Need to Matter More than Peers by Gordon Neufeld and Gabor Mate M.D.

Canadian doctors Neufeld and Mate present a compelling argument that the many struggles and problems children face, from disciplinary issues, bullying, suicide, to over-sexulization, stem from a disordered attachment to peers and broken connection to parents. Neufeld and Mate emphasize the importance of healthy parent-child relationship and challenge the effectiveness of many accepted forms of discipline. A well-written book, one that encourages a great deal of self-reflection.

Lost, broken and on a path of self-destruction after the death of her mother, Cheryl decides to re-discover herself but embarking on an epic journey. Without any training she sets out to hike the Pacific Coast Trail on her own. I have read about one-third of this book and I am having mixed feeling about it. While the book is captivating and well written, Strayed’s brutal honesty feels very self-absorbed at times and some of her decisions leave me cringing inside. I don’t think this is a book just anyone would enjoy.

Turning 100 is a perfect time to start over, right? Apparently Allan Karlson thinks so. This book has been on my list of books to read for a while now and I am hoping to start it soon.

Happiness for Beginners by Katerine Centre

Another story about exploring the outdoors as a means of self-reflection. I am wondering how this book will compare to Wild by Cheryl Strayed.

An Ember in the Ashes by Sabaa Tahir

Apparently a good book for those that enjoyed the Lunar Chronicle book series by Marissa Meyer. An Ember in Ashes is set in a Romanesque world with elements of fantasy. It is being described as an intense story about oppression, rebellion, secrets and the supernatural.

What I’m Reading in February