What I’m Reading in December 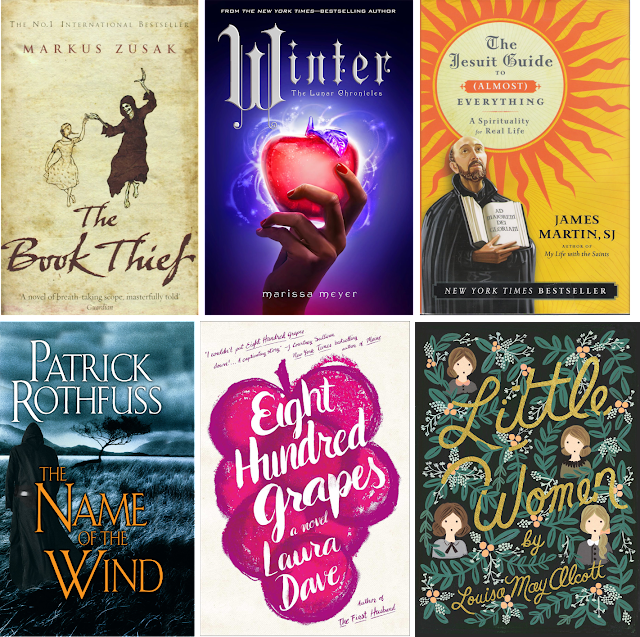 The Book Thief by Markus Zusak
The Book Thief is narrated by Death, a dispirited shadow that ferries the souls of the dead. The story takes place during the second world war and Death laments that work is too busy as of late. It is during Death’s many visits on earth that he encounters Liesel Meminger, a ten year old girl living in Nazi Germany, and out of curiosity he begins to take note of her as he lingers in the shadows. Liesel is a spirited girl that develops an affinity for stealing books but this is a dangerous pastime in Nazi Germany and it could lead to disaster and death. A curious book, filled with the sadness and tension of a story set during war, yet beautiful and heartwarming at the same time.

Winter by Marissa Meyer
After reading the first three books of the Lunar Chronicles: Cinder, Scarlet and Cress. I was greatly anticipating the final installment: Winter. Winter continues the stories of Cinder, Scarlet, Cress and intertwines that of Winter in a crazy futuristic fairy-tale finale. I would love to tell you that I had the self-control to read this book slowly but it was rather addictive and I finished it much too quickly. Now I am undergoing BSW, or more commonly known as books series withdrawal.

The Jesuit Guide to (Almost) Everything: A Spirituality for Real Life by James Martin
This book entered my life at precisely the right time. Martin is both funny and down-to-earth in talking about matters of spirituality. As the title of the book suggests this book is written for anyone interested how Jesuit spirituality can help guide their lives. Whether the reader subscribes to a particular faith, consider themselves SBNR (spiritual but nor religious), is agnostic or atheist, Martin welcomes all to consider Jesuit spirituality with an open heart and mind.

Little Women by Louisa May Alcott
When I think of Christmas-y books Little Women comes to mind. It has been a long time since I read this book and it is time, once again, to rediscover this beautiful story.

The Name of the Wind: The Kingkiller Chronicle: Day One by Patrick Rothfuss
After various genres of books in the last six month I feel like it is time to read something from the world of fantasy. I discovered this book on a list of Top 25 Fantasy Books and I am eager to delve into!

Eight Hundred Grapes by Laura Dave
I had planned to read this book over the summer and I had all but forgotten about it until it arrived in my library hold bin at the library this week. It is a story about secrets, relationships and wine, how can I resist? I may even need a glass of wine to go with it.

What I’m Reading in February