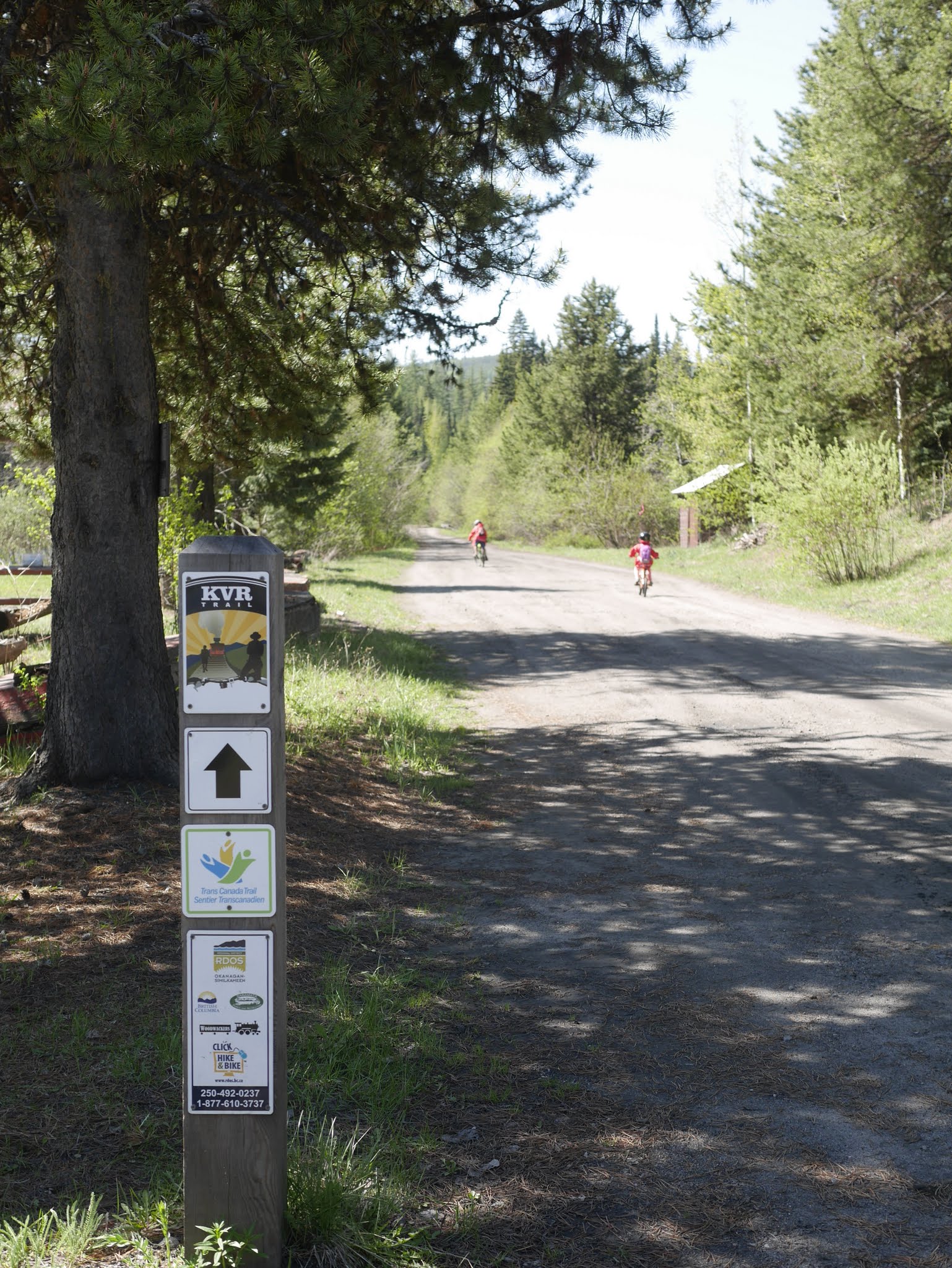 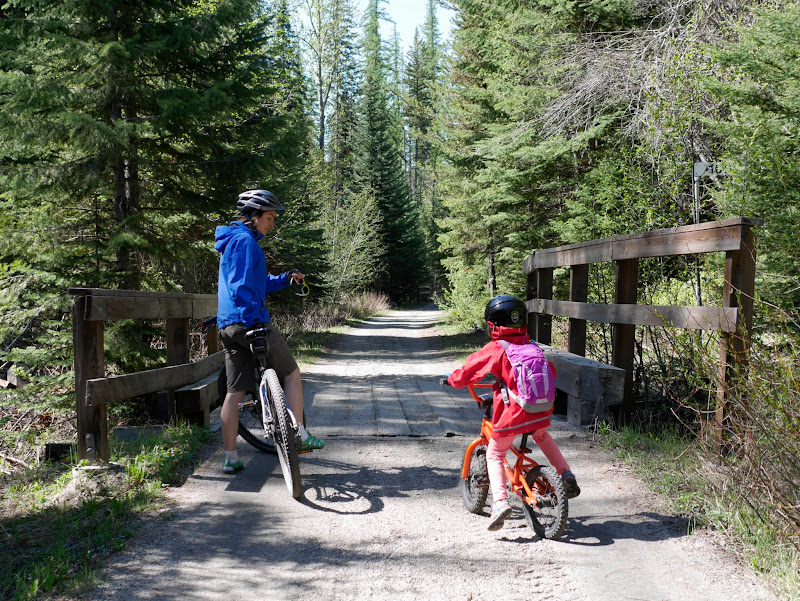 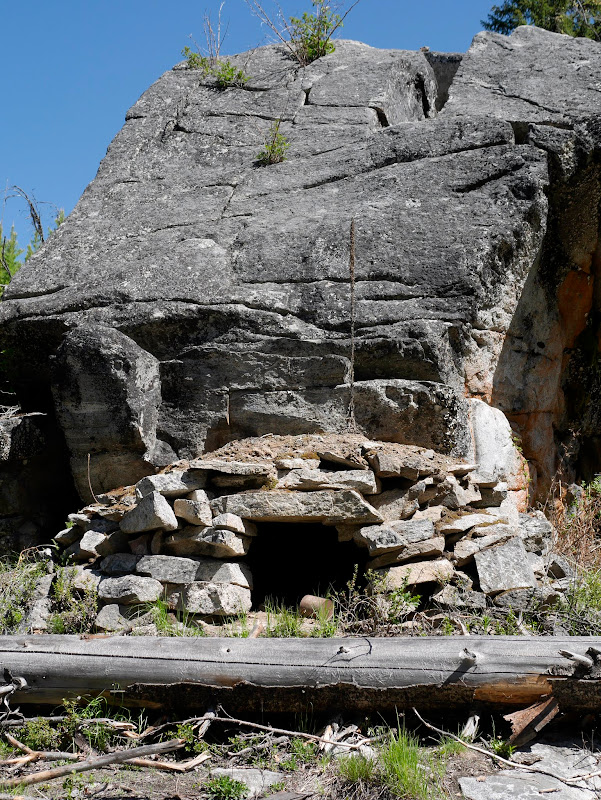 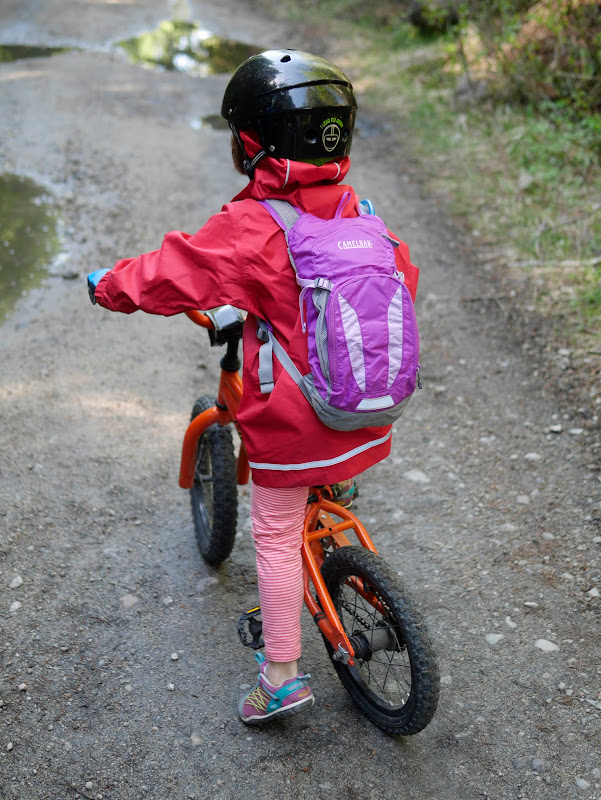 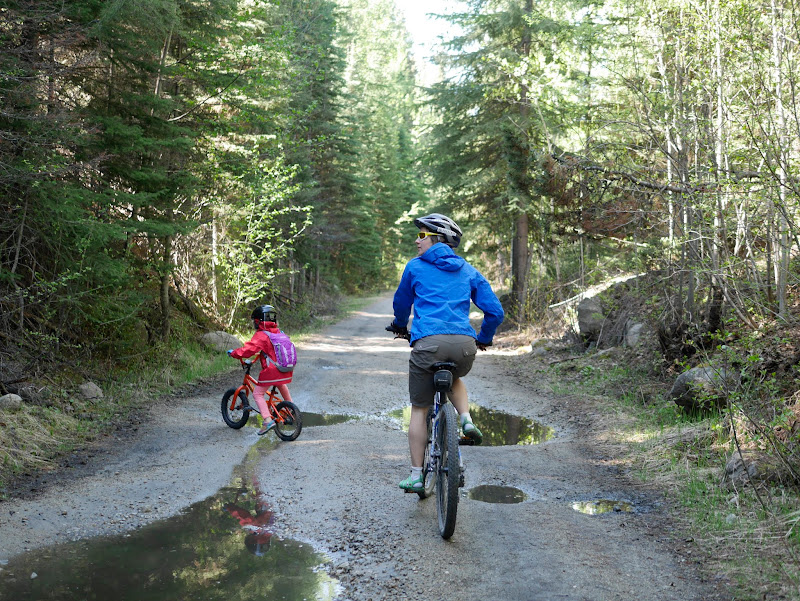 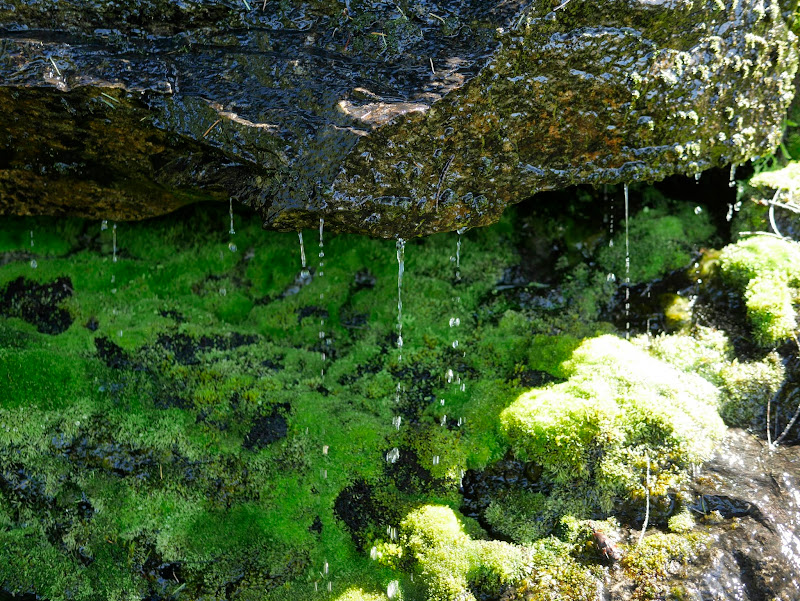 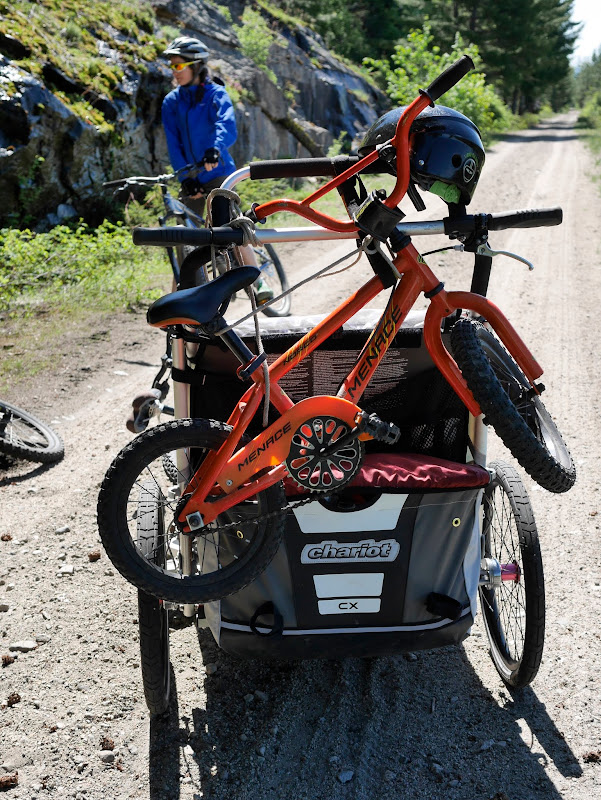 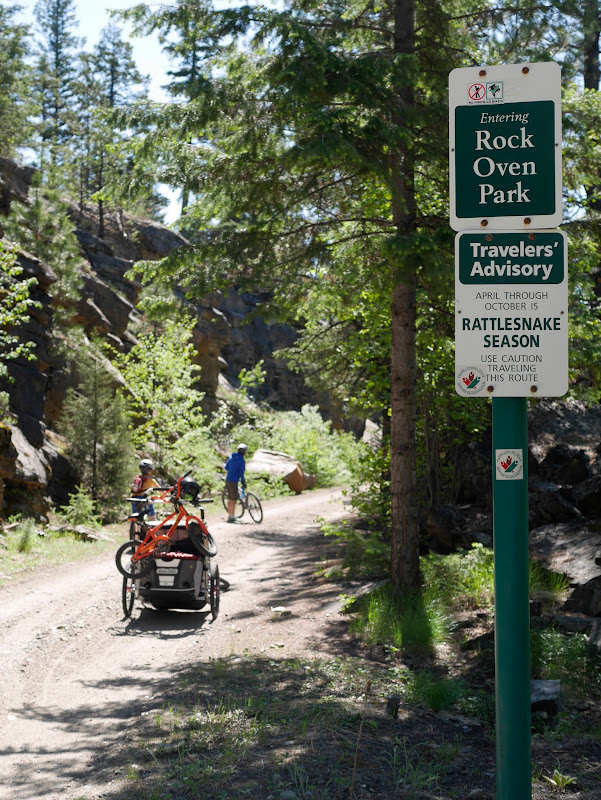 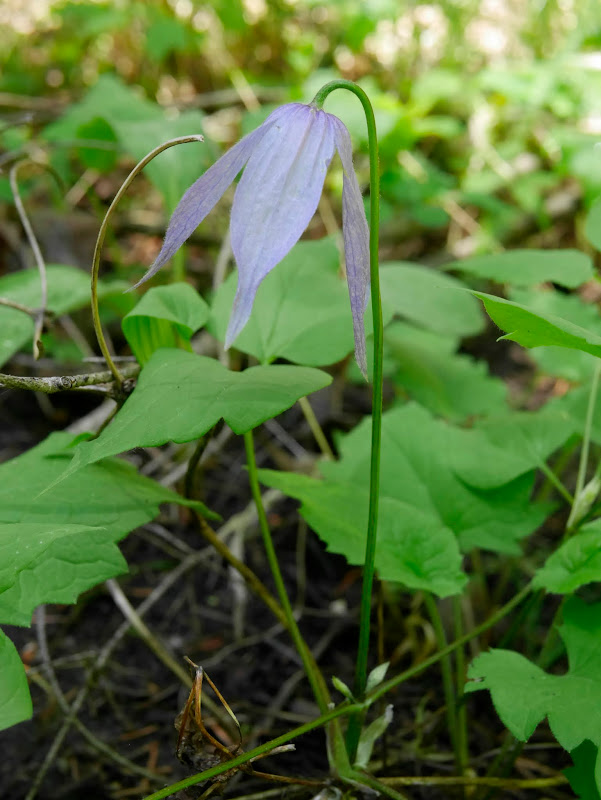 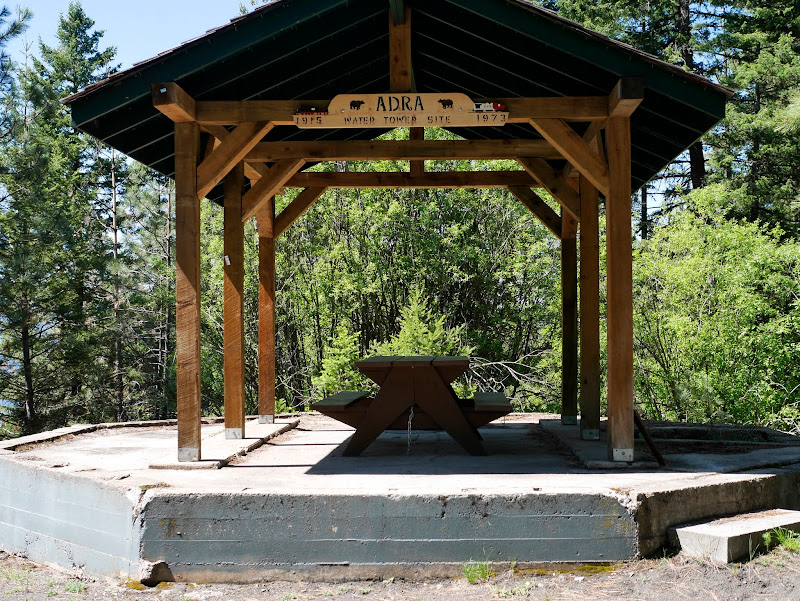 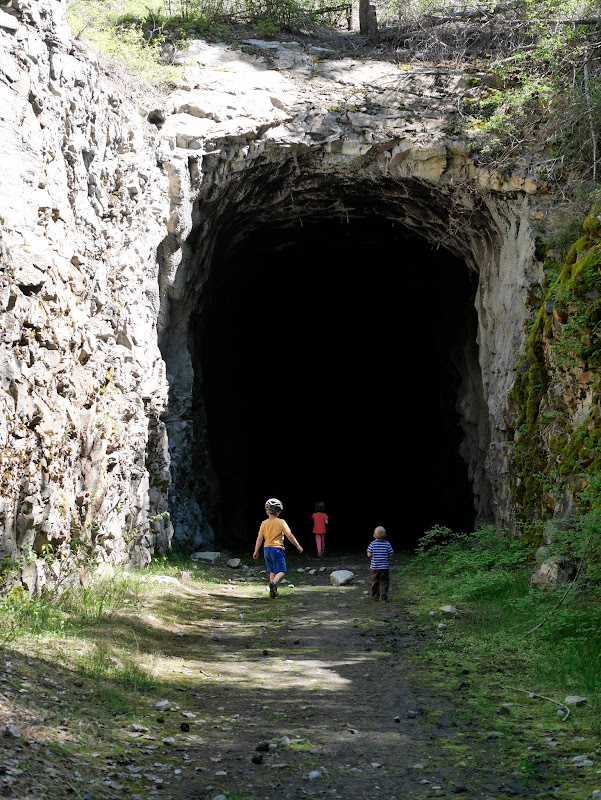 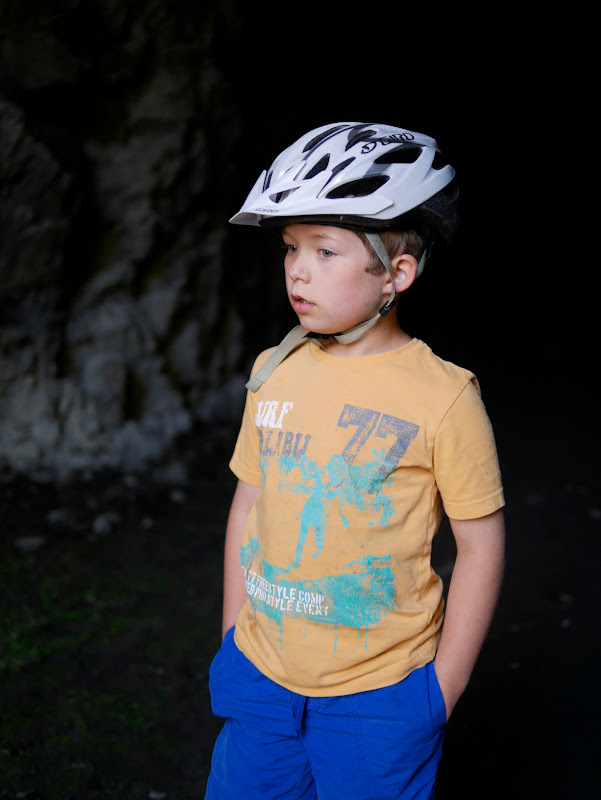 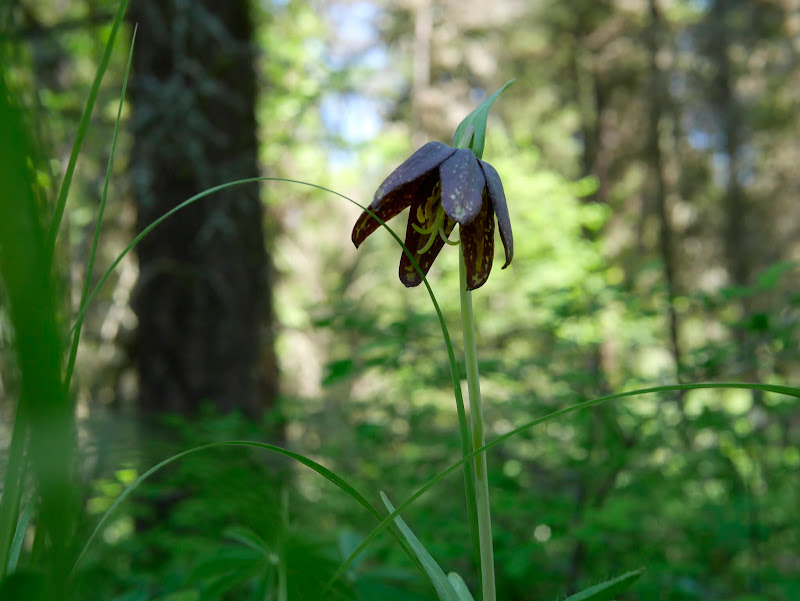 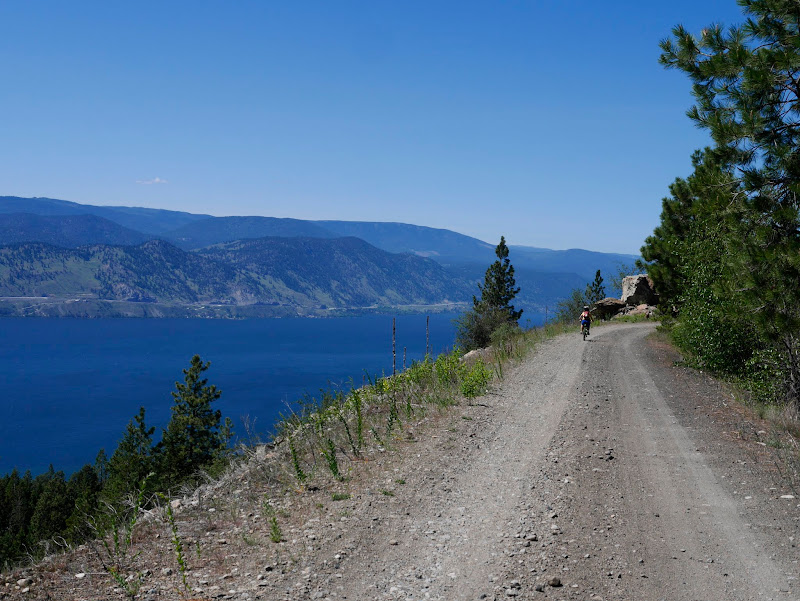 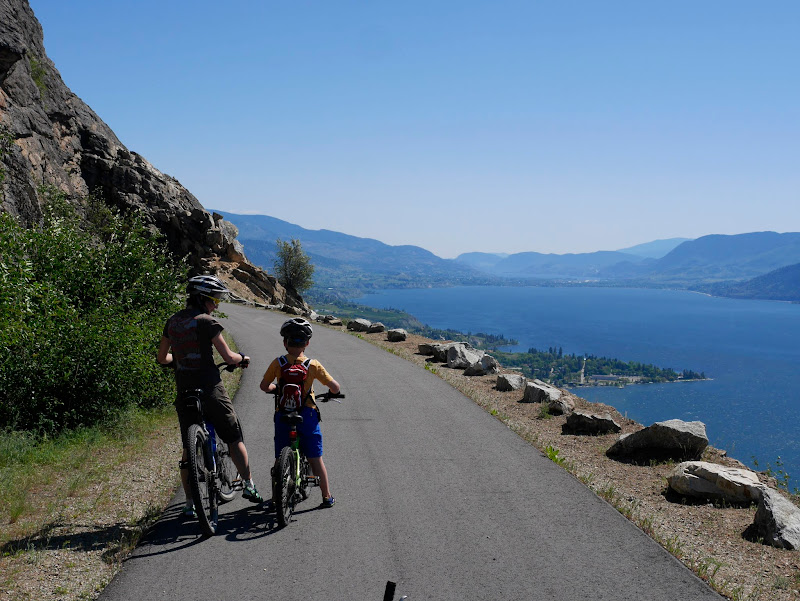 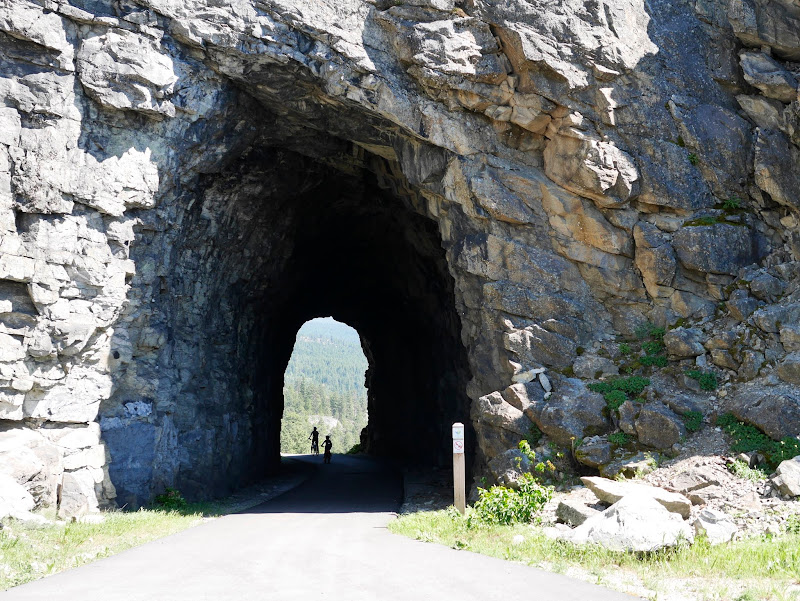 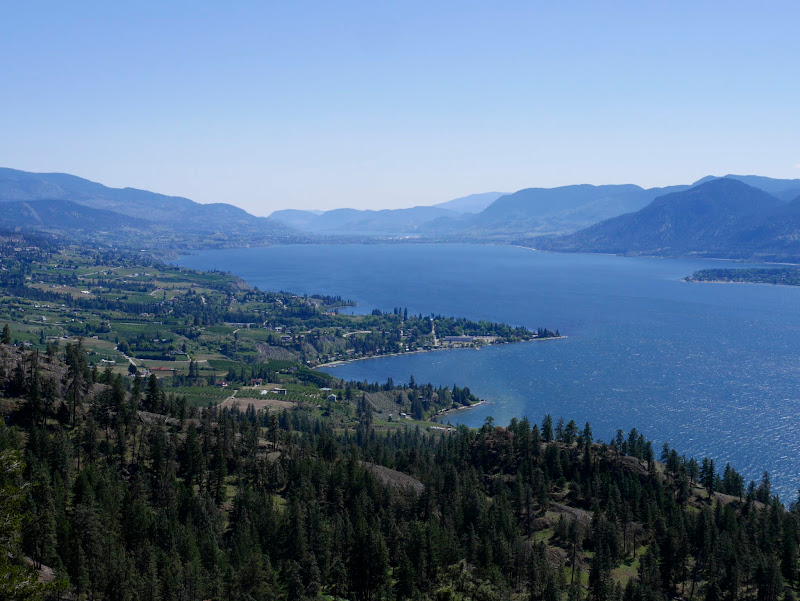 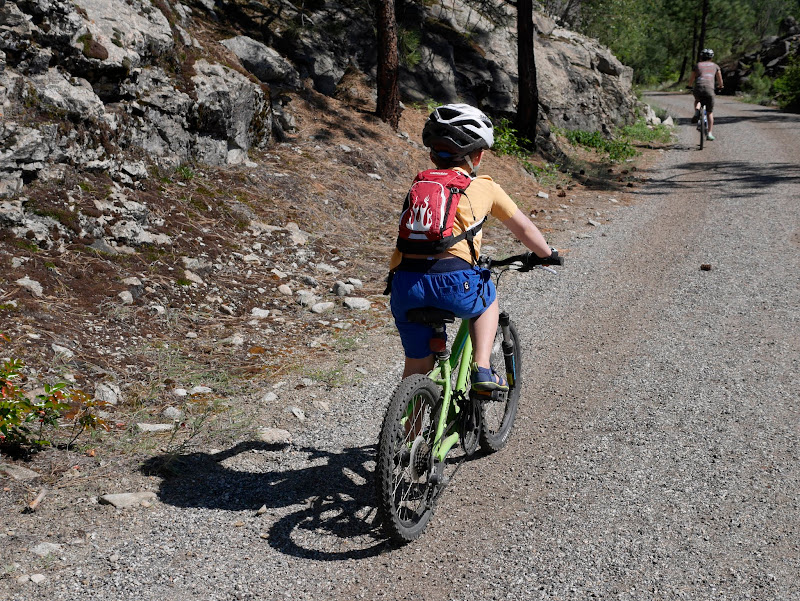 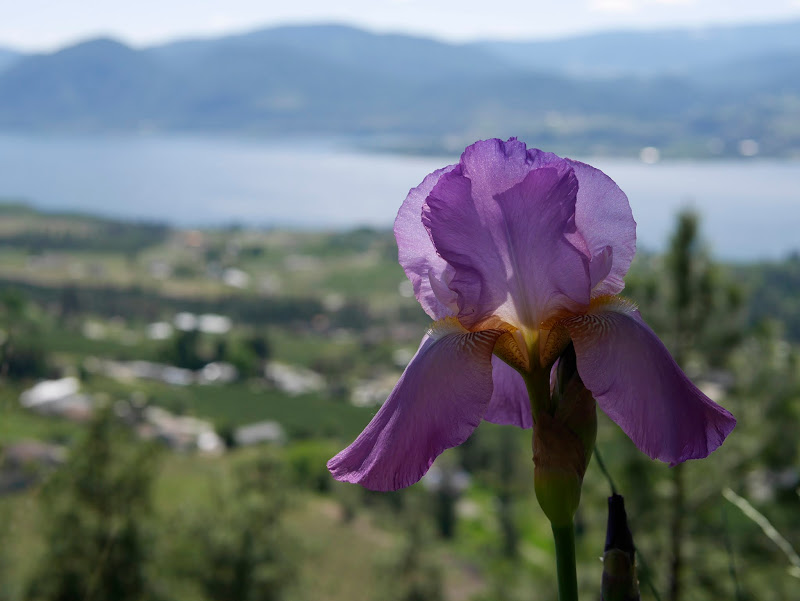 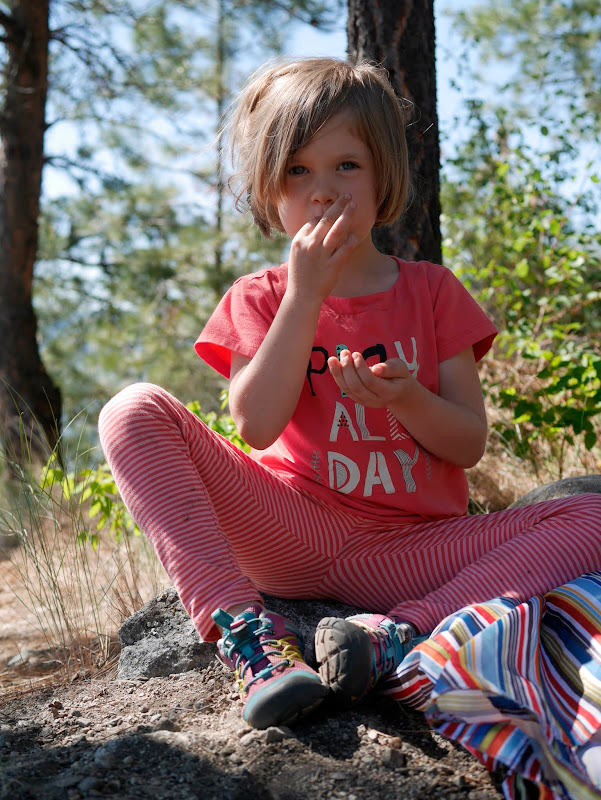 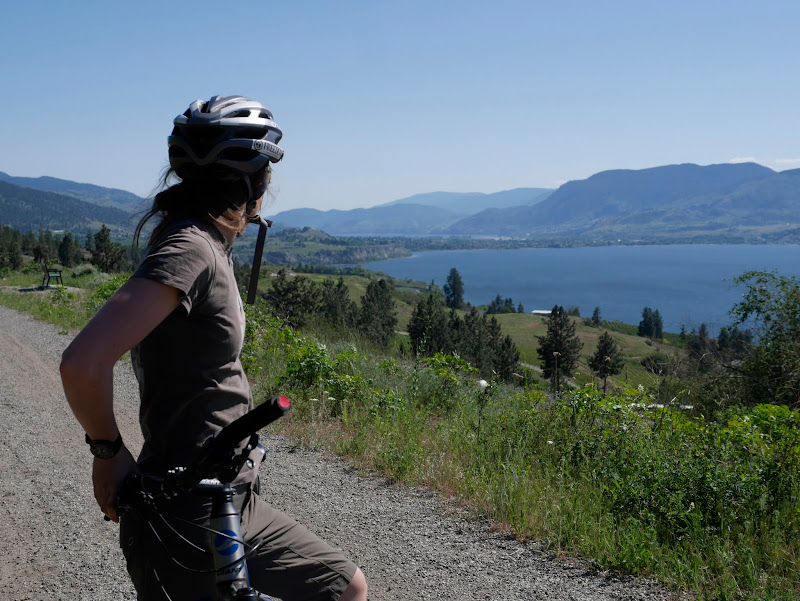 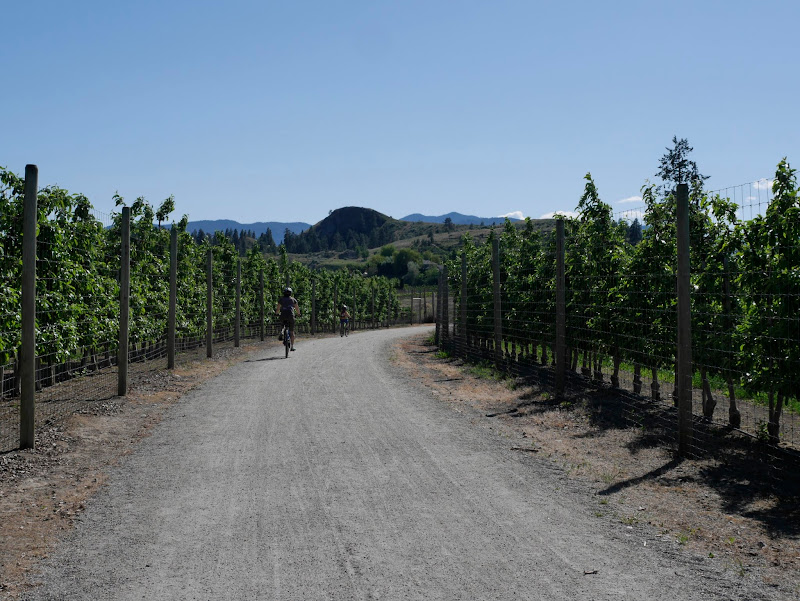 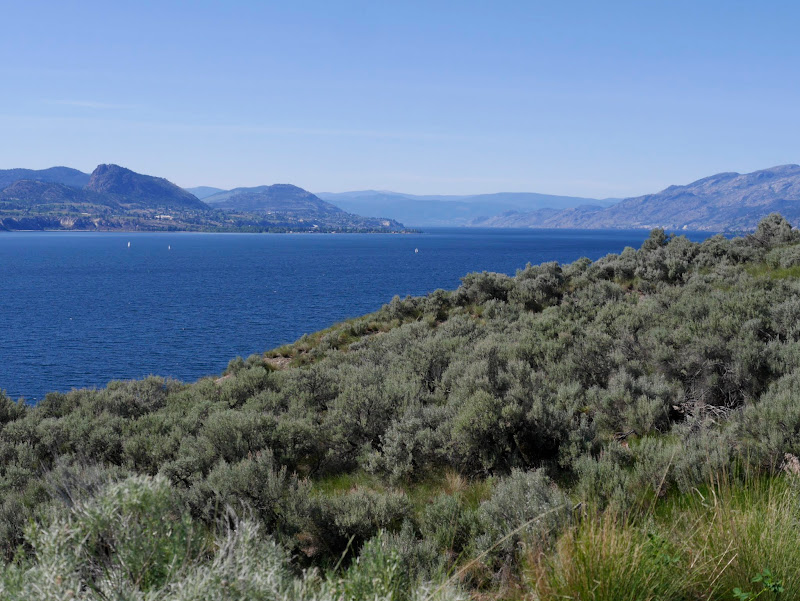 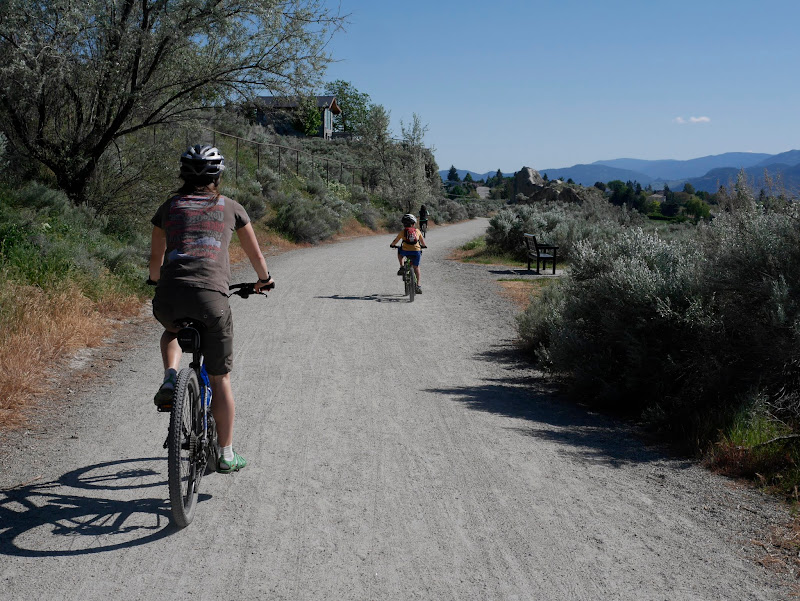 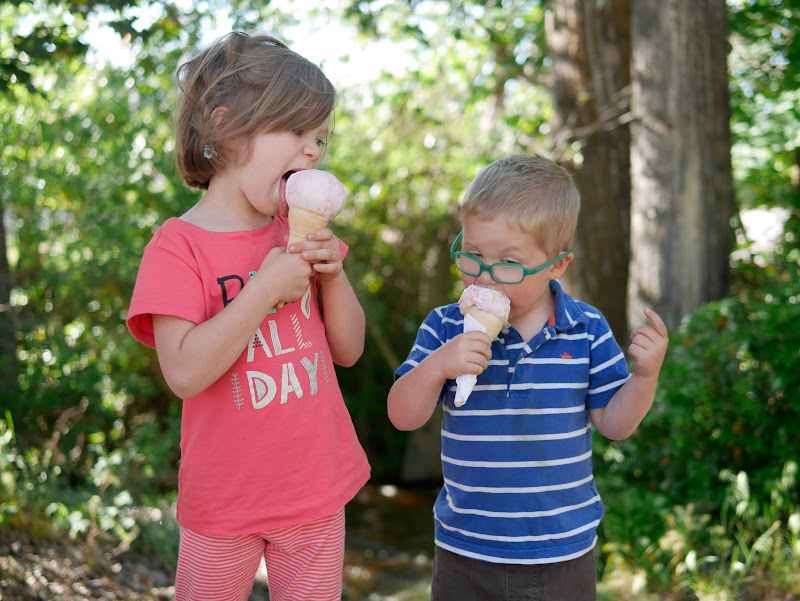 Over the last few years we have biked several portions of the KVR trail. One of our favourite sections has been the portion from Myra Station to Ruth Station commonly referred to as the Myra Canyon Trestles, which we biked with my sister last year. The twenty-three kilometer (23 km) round trip crosses eighteen trestle bridges and two tunnels making it an exciting family adventure. This year I wanted to bike a longer section of the KVR trail, and with my sister in town once again, we decided to complete the section from Chute Lake (Station) to Penticton.

Chute Lake is located thirty kilometers north of Penticton on the east side of Okanagan Lake. The lake is a popular spot for fishing and picnicking. It is also a great starting point for a forty-three kilometer (43 km) bike into Penticton. The easiest way to get to Chute Lake is to arrange a shuttle. Hoodoo Adventure, located at 131 Ellis St, Penticton, BC, offers bike shuttles as well as bike rentals. We arranged a shuttle time with them a couple days in advance and met at their location for pick-up.

We started our ride from Chute Lake at eleven in the morning (on May 5th). It was a bit chilly at first and we were grateful to have raincoats. The first portion of the KVR trail crosses several little bridges over Chute Creek. The trail was rocky with a few puddles and some sandy spots. My daughter struggled through it and eventually chose to sit in the Chariot with her younger brother.

There were plenty of beautiful wild flowers along the trail (early May) and we stopped often to admire them. After about ten kilometers of biking we had lunch at the entrance of the Rock Oven Park. The rock ovens were constructed by railway workers for baking bread and other food. There are many rock ovens throughout the Rock Oven Park and we stopped to explore several along the way. When we arrived at Adra Station we stopped to look at The Big Tunnel (Adra Tunnel). The tunnel is collapsed and blocked so we did not venture far into it. There is a short bypass trail nearby.

We took our time along the two long switchback loops and enjoyed some spectacular views along the way. At the 122 kilometer marker, there is a small section of paved trail that leads up to and through Little Tunnel. On the other side of the tunnel the pavement ends but the continuing trail is much smoother and easier to ride. My backside was thankful! As we rode through Naramata and down into Penticton the views were breathtaking. The vineyards, orchards, lake… I could go on. There is one easy to access vineyard along the way: Hillside Winery. We did not stop but it would make for a nice place to visit. I did not want to see the end our cycling adventure but the trail ended and it was time to go to Tickleberry’s for ice cream.

Forty-three kilometers (43 km) sounds like a long way for a family bike ride and I was not sure how we would manage. What made the long ride not only possible but enjoyable is that the entire trail has a downhill slope ranging from 1.6 to 2.2%. My daughter (6) did struggle with the loose gravel and sand and spent most of the ride in the double Chariot with her brother (4). Next time I would consider using a Trail-a-Bike for her. My eldest (8) rode the whole trail without a single complaint – what a trooper! Pulling the double Chariot behind my bike worked really well except for a few sandy spot but they were minor. From start to finish it took us five-an-half hours and that included plenty of time for breaks and exploring.

A Concert on the Beach

A National Park Reserve in the South...

Bravo. You are really an adventurous group. Good photos. Thanks. Alice