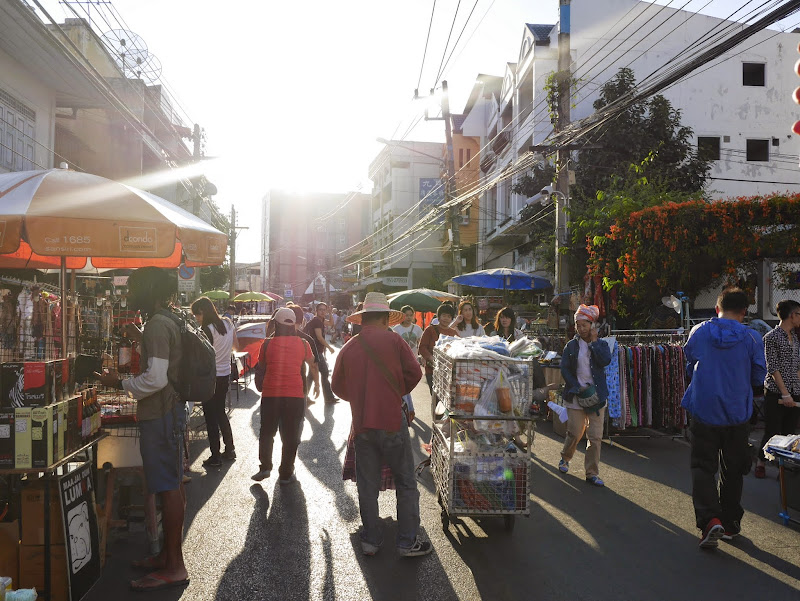 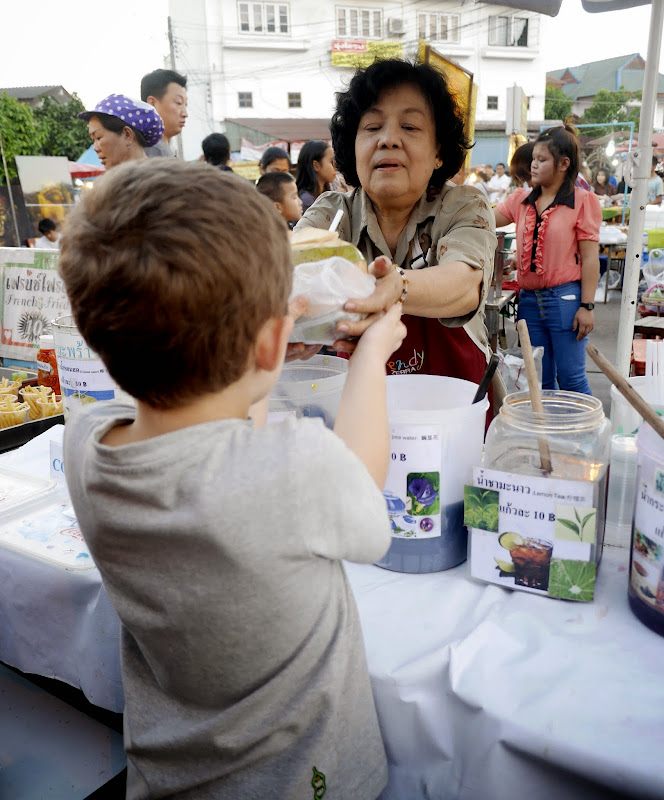 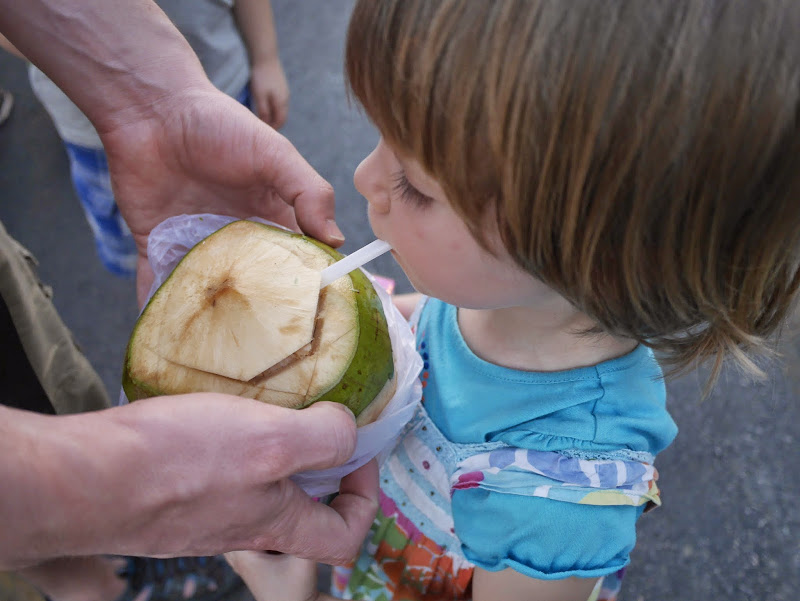 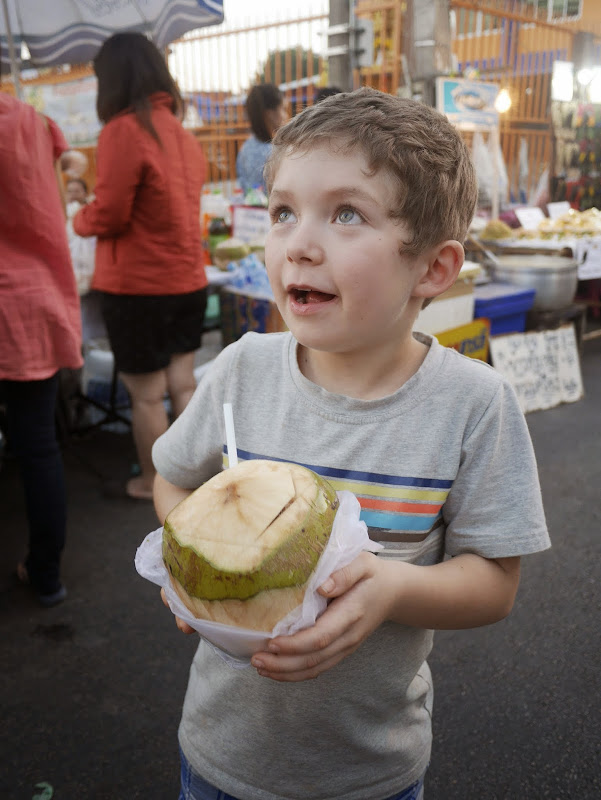 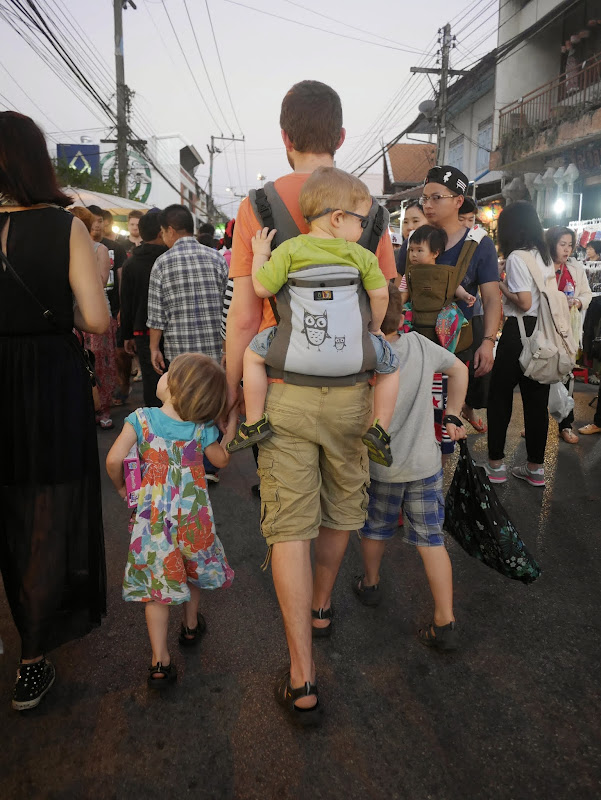 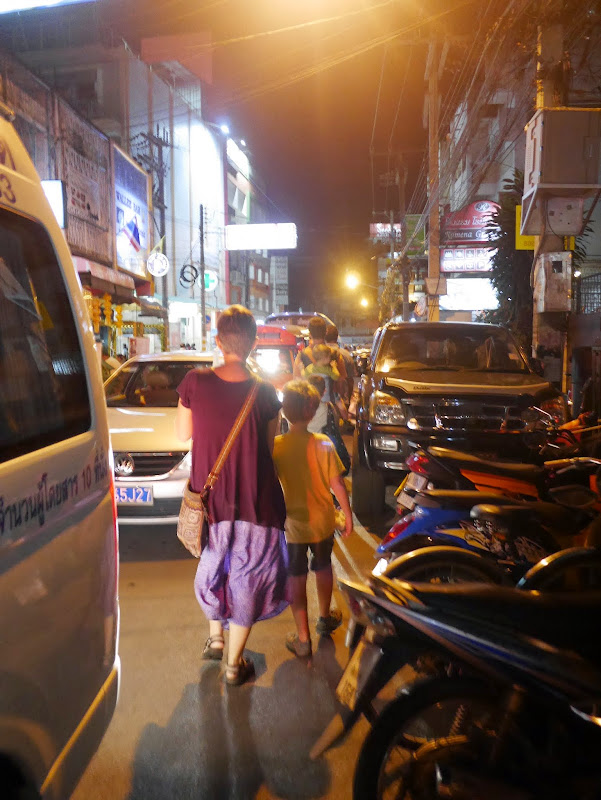 Chiang Mai’s Saturday night market starts at Chiang Mai Gate and stretches along Wu Lai road. The market goes on for about one kilometer and overflows onto many of the side streets along the way. Our friends suggested we go to market at four in the afternoon which is when the vendors start setting up their booths. At this point the market is relatively quiet which makes it easier to get around and see what the vendors have to offer. By six o’clock at night the market is packed with people and walking turns to shuffling as you’re carried along by a sea of bodies.

The market itself tends to cater to tourists with vendors selling clothing, silverware, handmade crafts, art and food. We did not purchase much. I bought a shirt and Felix tried his first coconut drink. The children also found some fake lego, or flego as my friend’s son calls it. Even though we did not purchase many things walking through the market was an adventure. The smell of food cooking, the sound of music playing and the colourful wares on display are a feast for the senses. At one point the national anthem started playing and for a couple minutes everyone stood still as a sign of respect. It was as if someone had pushed a pause button at the market and it felt surreal. We perused the market for about two and half hours and then my two younger children were ready to return to the hotel. The market goes on late into the night for those that don’t have three little ones to tuck in.
Chiang MaiMarket
4 comments
0
FacebookTwitterPinterestEmail
previous post

Neat! That is cool – about the national anthem. I'm not sure how you're having time to blog all this, but I'm glad you are!

I love hearing these stories! The museum pictures you posted were ah-ma-zing! I'm so thankful you're able to do some blogging while you're there!

As I was at my friend Betty for 3 nights and days I am just reading your blog as I am home for the week end and will go again to Betty tomorrow afternoon for more sleep over. That is why I did not reply to your Blog. Wonderful and quite amazing. Beautiful places and excellent photos.I also wonder when do you get the time to do all your writing? I will read your blog again only on Wednesday when I will be home overnight only then back to Betty.

Looks like you guys are having the most wonderful time. Love that you are sharing it with all of us. Enjoy!